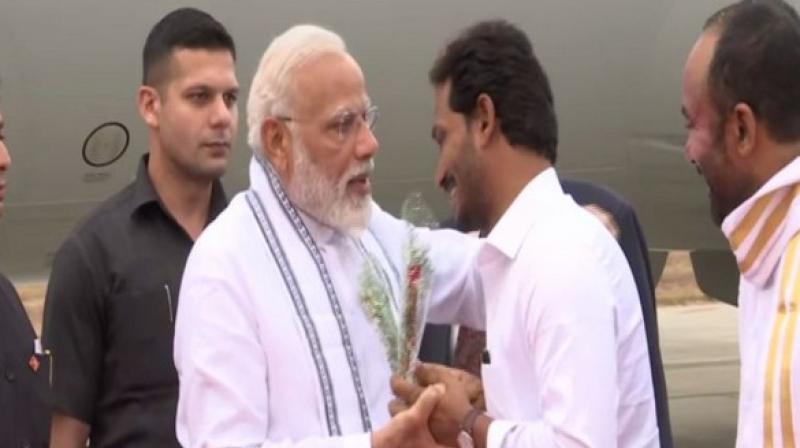 PM Modi thanked the people of Andhra Pradesh and Tamil Nadu for participating in the elections and forming the government of their choice in the two states. (Photo: ANI twitter)

Tirupati: Prime Minister Narendra Modi on Sunday said he had come to Tirupati to seek blessings of Lord Venkateswara after forming the new government.

"I have had the good fortune to come to Tirupati many times in the past too, I have come here to take the blessings of Lord Venkateshwara after forming the new government. I want the Lord to bless us so that we can fulfil the dreams of 130 crore Indians together," Modi said at a public meeting here.

PM Modi thanked the people of Andhra Pradesh and Tamil Nadu for participating in the elections and forming the government of their choice in the two states.

Modi added that all BJP 'karyakartas' including himself were servants of the nation and added that even when the party wasn't able to win seats in the municipality elections, they had always raised the slogan of 'Bharat Mata ki Jai'.

"We are not electoral organisms, we are committed to providing safety, security and growth to the people of the country, this goes for every BJP worker across the nation. This is why the voters elected us to power for a second time," he said.

"We will work especially hard for Andhra Pradesh and Tamil Nadu. I want to give my best wishes to Jaganmohan Reddyji, he too will take Andhra Pradesh forward, I want to assure that Indian government will always be there for the people of Andhra," Modi promised.

Earlier, PM Modi was welcomed by Andhra Pradesh Chief Minister YSR Jaganmohan Reddy at the Tirupati Airport on his arrival from Colombo on Sunday.

Andhra Pradesh Governor ESL Narasimhan and five deputy chief ministers in the newly elected Reddy government along with other leaders were also present to welcome the Prime Minister who was returning after his two-nation trip to Maldives and Sri Lanka.

The YSRCP leader and newly elected CM received a pat on the back from PM Modi after he tried to touch the latter's feet twice.