'The biggest plan under our manifesto is -- NYAY (Nyuntam Aay Yojana),' Priyanka said. 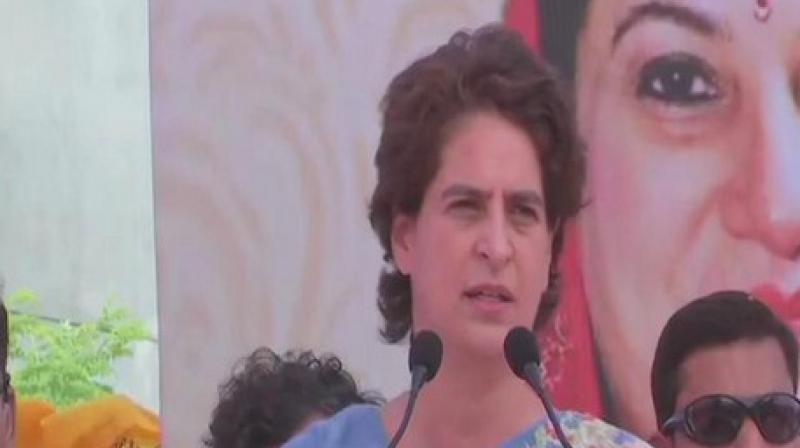 Five of the seven phases of the general elections have concluded, while two phases are scheduled to be held on May 12 and May 19. (Photo: ANI twitter)

Addressing an election rally here in support of Congress candidate Ratna Singh, she slammed PM Modi and said, "I have never seen a prime minister more coward and weak than PM Modi. Political power neither comes from campaigning nor does it come from boasting on the television."

Amidst chants of "chowkidar chor hai", she asserted that job creation for youths, farmers' progress and safety of women are among the key challenges India is facing today.

"He (Modi) promised to put 15 lakhs into your account, employment will be given to 2 crore youth, income will be double, but so far nothing has been done. You are slipping into debt while the debts of the big lobbyist are being waived off. They never show any sympathy for you."

In tune with the party's promise in the election manifesto, she said: "Mahatma Gandhi National Rural Employment Guarantee Act (MNREGA) has been diluted by the Bharatiya Janata Party. If our party is voted to power, we will increase the number of days a person can work under MNREGA from 100 days to 150 days."

Among other things, she reiterated Congress' promise of depositing Rs 72,000 annually into the accounts of the 20 per cent of the poor people of the country. "The biggest plan under our manifesto is -- NYAY (Nyuntam Aay Yojana). Under this scheme, the poorest families of the country will get Rs 72,000 yearly if the Congress comes to power at the Centre," she said.

Five of the seven phases of the general elections have concluded, while two phases are scheduled to be held on May 12 and May 19. Counting of votes will take place on May 23. Polling in Uttar Pradesh is being held in all seven phases.