Modi can't speak on govt performance so harping on past: Rahul Gandhi

He also promised that the Congress would fill 22 lakh vacant posts in government services within a year of coming to power. 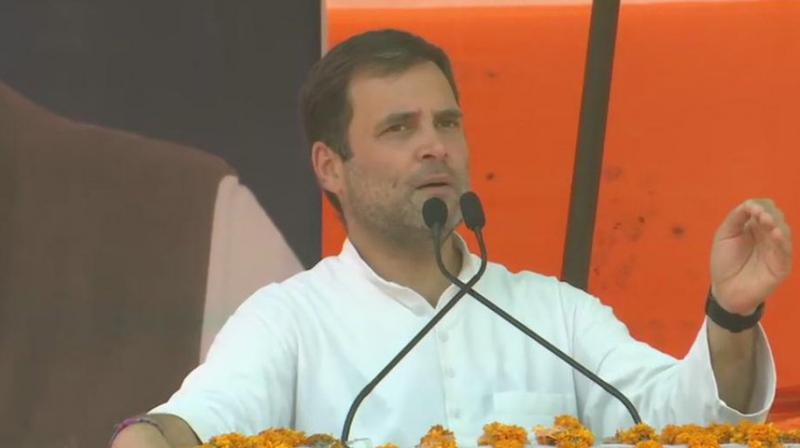 Bina: Prime Minister Narendra Modi is unable to speak on his government's performance and hence keeps talking about what happened in the past, Congress chief Rahul Gandhi said Thursday.

Addressing a poll rally here, Gandhi also said that time had come for bidding good bye to ruling the BJP. The Congress chief did not refer to any specific remark made by the prime minister, but his comments come in the wake of Modi's constant criticism of the Gandhis during the ongoing Lok Sabha poll campaign.

"He (Modi) cannot talk about (the promises made about) employment, farmers, Rs 15 lakh (to be deposited in bank account of each Indian) and achche din (good days). He can only talk about the past," Gandhi said. "Modi ji, India chose you as prime minister five years ago. India does not want to understand from you what others did. India wants to understand what you did and will do," Gandhi said.

He reiterated that Modi ensured industrialist Anil Ambani got contract worth Rs 30,000 crore in the Rafale jet purchase deal and termed the same as a scam. Modi feels he alone runs the country, Gandhi said. The truth is that it is the people who do so, he added.

Gandhi also talked about his party's proposed Nyay minimum income guarantee scheme that envisages giving Rs 72,000 per year to five crore poor families of the country if the Congress is voted to power. He also promised that the Congress would fill 22 lakh vacant posts in government services within a year of coming to power.