India   Politics  09 May 2018  Simply arrogance, how can he declare himself PM: Modi attacks Rahul
India, Politics

Simply arrogance, how can he declare himself PM: Modi attacks Rahul

Prime Minister Narendra Modi said the Congress has not done justice with the aspirations of the people of Karnataka. 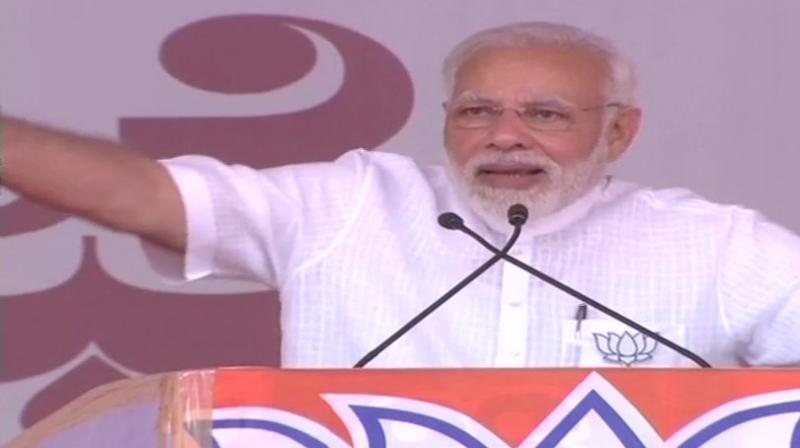 Karnataka Assembly election 2018: Prime Minister Narendra Modi said election in the state is not only about who will win, but it will decide the future of Karnataka's youth. (Photo: @ANI | Twitter)

Bangarapet (Karnataka): Once again intensifying his attack on the Congress Prime Minister Narendra Modi on Wednesday said it is time for the people of Karnataka to bid farewell to the party.

Addressing an election rally at Bangarpet, PM Modi said, "People of various states have bid farewell to the Congress and that now it is time for the people of Karnataka to do the same."

"It is high time that the people of Karnataka see through the intent of the Congress and instead vote for those who work, those who show the results on the ground. Karnataka must reject the Naamdaars, and vote for the Kaamdaars," said Prime Minister Narendra Modi, urging people to vote the Congress out in the May 12 elections.

The Prime Minister said that the Congress has not done justice with the aspirations of the people of Karnataka. He added that the election in the state is not only about who will win, but it will decide the future of Karnataka's youth.

Prime Minister Narendra Modi said, “There was a time when the Congress flag used to fly from the Panchayat to the Parliament but because of you (voters) the Congress has fallen down today.”

"Congress culture, Communalism, Casteism, Crime, Corruption, Contractor system -- these are the six evils that the Congress has brought on the nation and these are the evils Congress stands for," PM Modi said.

PM Modi said that these six C's are destroying the Constitution and is hampering the true spirit of democracy.

The Prime Minister said the Congress thinks that when they win an election, they have got a contract to carry out their corrupt practices.

Modi said when Manmohan Singh was the prime minister, the remote control was at 10 Janpath and the show was being run by Sonia Gandhi.

"You voted us - the BJP - to power in 2014. We too have a remote control, but the remote control is in the hands of 125 crore countrymen. You all are my high command. I do as you say," said the Prime Minister.

"The Congress is famous for its black-marketing (kale dhande)... You must have seen during demonetisation how the Congress leaders were rattled and struggling... You all saw how money and jewellery was found in their homes, under beds, hidden elsewhere... The Congress sowed the seeds of black money and corrupt practices in India over the decades... A seed that has destroyed India, but benefitted the Family," PM Modi said.