Singh also said that these 'beyond the borders' operations were carried against terrorists. 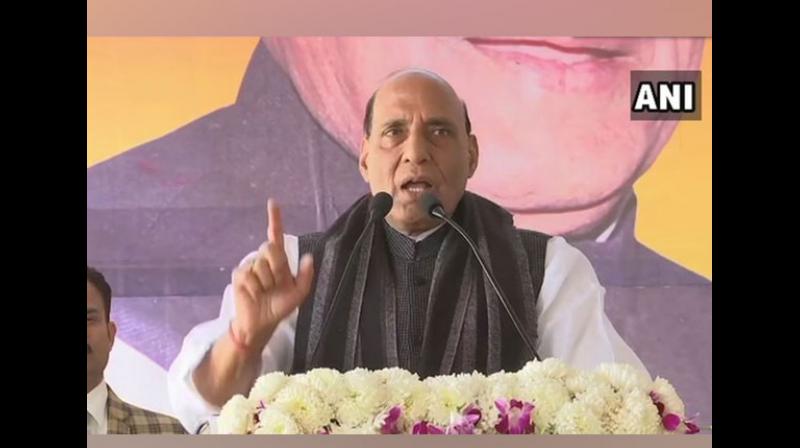 Manguluru: Home Minister Rajnath Singh in a public rally at Manguluru, Karnataka on Saturday claimed that Indian forces, apart from the surgical strike after the Uri terror attack and the air strikes in Pakistan's Balakot after Pulwama, carried out a "third strike" but stopped short of revealing the details.

Singh also said that these “beyond the borders” operations were carried against terrorists.

"In the last five years, three times we have crossed the border and conducted successful strikes. I will provide information on two, but not the third. Once in Uri, our soldiers were killed by terrorists coming from Pakistan, then our soldiers had responded. Next was after Pulwama. The third one I will not disclose," Rajnath Singh said in a video of which has been shared by news agency ANI.

"You have seen that in Uri, the terrorist who came from Pakistani soil have taken lives of 17 of our Army personnel who were sleeping at that time, in a cowardly attack. After that what our Army did everybody knows very well. The second air strike was after the Pulwama terror attack. I will not give you the information about the third one,” he added.

The Home Minister further said that India has drastically changed and is no more a ‘weak’ but a ‘strong’ nation. “Our policy is very clear, we will not disturb anybody but if somebody disturbs us we will not leave him,” he said.

Rajnath also took on leaders who asked for ‘proof’ of the air-strike and ‘figures’ in terms of casualties by saying that they don’t believe in the sacrifice and valour of Army.

“It seems that they don’t believe in the valour of our soldiers, our pilots went there in Pakistan not for showering flowers but were on a targeted mission on basis of intelligence inputs,” he said.

India carried out an air strike on February 26 on Jaish-e-Mohammad (JeM) camp in Balakot, 13 days after the Jaish terror attack in Pulwama in which 40 CRPF personnel lost their lives.