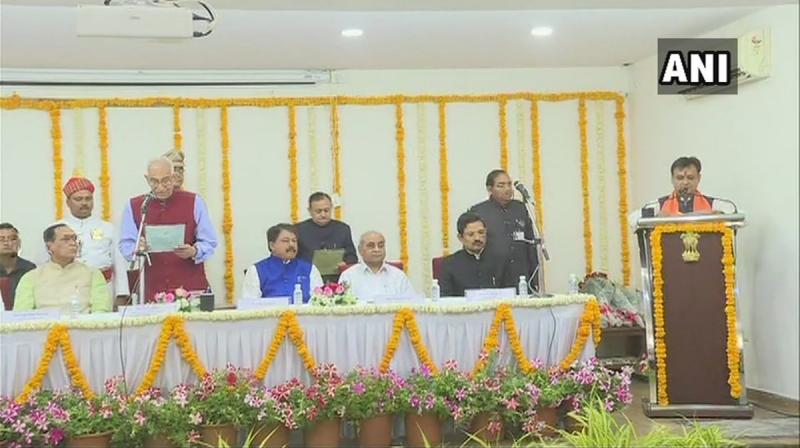 The function was held in the presence of select few including the chief minister, few ministers and some top officials inside the Raj Bhavan without any prior announcement. (Photo: Twitter/ANI)

Ahmedabad: Gujarat Chief Minister Vijay Rupani on Saturday expanded his cabinet by inducting three members, including Congress turncoat Jawahar Chavda, who was rewarded with a ministerial berth a day after he joined the BJP.

BJP MLA from Manjalpur of Vadodara district Yogesh Patel and Jamnagar West MLA Dharmendrasinh Jadeja, who had crossed over from Congress, were the other two members inducted into the cabinet.

Gujarat Governor O P Kohli administered the oath of office to them. "The ministry of Vijay Rupani was expanded on Saturday with the induction of three ministers," deputy chief minister Nitin Patel told reporters outside the Raj Bhavan in Gandhinagar after the ceremony in the afternoon.

"Jawahar Chavda was inducted as a cabinet minister, while Yogesh Patel and Dharmendrasinh Jadeja were included as minister of state," Patel said, adding that they will be allocated portfolios later.

The function was held in the presence of select few including the chief minister, few ministers and some top officials inside the Raj Bhavan without any prior announcement.

Chavda is a four-time MLA from Manavadar constituency and a prominent leader of OBC Ahir community.

He had resigned as MLA as well as the Congress party and joined the BJP on Friday. Earlier in the day, Patel had confirmed to PTI that apart from him, Chavda and Jadeja would take oath as ministers.

A seven-time MLA from Manjalpur, Patel had earlier expressed dissatisfaction against the BJP government over several issues including lack of representation from Vadodara region in the Rupani cabinet.

After quitting Congress ahead of the 2017 assembly polls, Jadeja had joined the Bharatiya Janata Party (BJP) and contested from Jamnagar West constituency on a BJP ticket and won.

With their induction, the number of ministers in the Bharatiya Janata Party (BJP)-led government has gone up to 24.

As per the rules, the size of the council of ministers should not exceed 15 per cent of the total number of members of the state assembly.

So, the Rupani-led government can have a total of 27 ministers. The chief minister had last expanded his cabinet in July 2018 and inducted veteran leader Kunvarji Bavaliya, on the same day of him quitting the Congress.