Modi said everyone must focus on how to take the country forward in the next 25 years, when India will complete 100 years of Independence 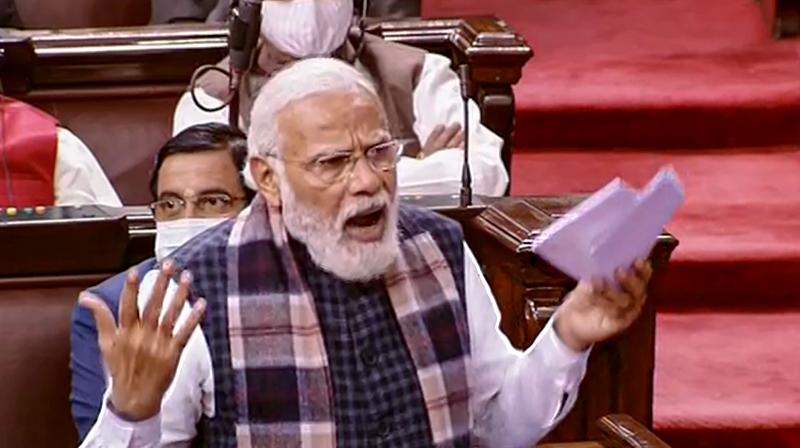 New Delhi: Prime Minister Narendra Modi lashed out at the Congress on Tuesday in his intervention in the Rajya Sabha on the motion of thanks to the President for his address. He alleged the Congress had been “hijacked” by “urban Naxals”, and that their ideology was being followed by the Opposition party. He said: “It is being said that we are trying to change history. The Congress thinking seems to have been hijacked by urban Naxals. We just want to improve the memory of some people. We are not changing history. Some people’s history is limited to just one family.”

Attacking dynastic politics, the PM said: “The difficulty faced by the Congress is that they never thought of anything else before the dynasty. We have to accept that the biggest threat to India’s democracy are the dynastic parties. When a family is the supreme in any party, then the first casualty is that of talent.”

Responding to Leader of the Opposition Mallikarjun Kharge in the Upper House last week, Mr Modi said: “Kharge ji said the Congress laid the foundation of the country and the BJP only foisted its flag on it. This was not said in a lighter vein, this is a result of that thinking that India was born in 1947. And it is a result of this that the people who ruled for 50 years have this thinking, this democracy is not at your mercy. You throttled democracy in 1975.”

Invoking Mahatma Gandhi, Prime Minister Modi told the Rajya Sabha that the Father of the Nation wanted the Congress to be disbanded after Independence.  He said: “Had there been no Congress, there would be no Emergency. India would be free of dynastic rule and would tread on the path of swadeshi instead of being influenced by foreign mindsets. Had there been no Congress, the poor would get electricity and water.” He said that often it was asked what would have happened if the Congress was not there.

Continuing his attack, Mr Modi said the “Congress high command” had three ways of functioning -- to discredit, destabilise and dismiss -- and cited examples of state governments being “dismissed” in the past. Speaking on cooperative federalism Mr Modi said Covid-19 was a golden period for the federal system. The PM held 23 meetings with the chief ministers to develop a roadmap and to take everyone along to frame policies. He accused the principal Opposition party of boycotting the all-party meetings, and added: “You boycotted… even Trinamul Congress attended, I don’t know who your advisers are? Pick up the next day’s newspapers, your actions were criticised.”

On India’s economy, Mr Modi said everyone must focus on how to take the country forward in the next 25 years, when India will complete 100 years of Independence. “India is among the top three nations in terms of start-ups due to the efforts of the youth,” he said, adding the government was focused on infra projects to help generate employment opportunities during the Covid-19 pandemic. Countering the Opposition over inflation, the PM took a swipe at the Congress. “Inflation had touched double digits during the UPA regime. While in present times, India is the only country which has registered medium inflation and high growth.”

Mr Modi also alleged that Jawaharlal Nehru, the country’s first PM, had refused to send the Indian Army to help liberate Goa. “Goa cannot forget this attitude of the Congress,” he said.

After an hour of the Prime Minister’s 96-minute speech, the Congress members walked out of the House as a mark of protest. Responding to Mr Modi’s address, Mr Rahul Gandhi said the PM had not answered the points that he had raised, and added: “I had said that there are two Indias -- one of the chosen rich and the other of the poor. Then I said our institutions are being captured and that is hurting the country. Then I had said that China and Pakistan have become one, which is dangerous. The PM did not respond to any of this.”