The SP battle will shift to New Delhi with both factions going to the Election Commission in their bid to claim the party’s symbol. 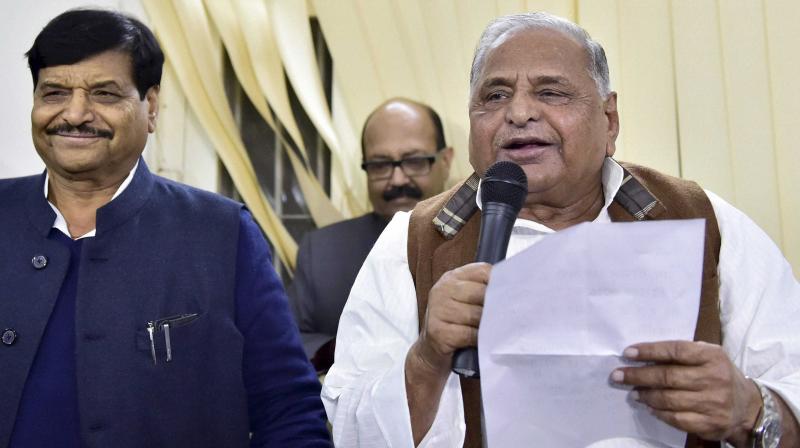 New Delhi: There was no end in sight to the bitter feud in the Samajwadi Party with party patriarch Mulayam Singh Yadav maintaining on Sunday that he remained the SP president, and questioning the legality of the convention that ousted him as president as well as the signatures of support collected by the faction led by his son and Uttar Pradesh chief minister Akhilesh Yadav.

Mulayam Singh Yadav said the convention on January 1 in Lucknow in which he was ousted as national president was illegal as the party had already expelled Ram Gopal Yadav, who had called that meeting. “Ram Gopal Yadav was expelled from the party for six years on December 30. Therefore, the party’s national convention called by him on January 1, 2017 was illegal,” the senior socialist leader said.

The SP battle will shift to New Delhi on Monday with both factions going to the Election Commission in their bid to claim the party’s symbol, the cycle. The EC had set January 9 as the deadline for both sides submitting their representations on the issue.

On behalf of the Akhilesh faction, Ram Gopal Yadav had on Saturday given the EC affidavits claimed to have been signed by 90 per cent of party legislators and delegates, including over 200 of the 229 MLAs who are backing the chief minister.

Mulayam Singh Yadav said on Sunday that the Election Commission should examine the validity of the papers that were submitted by Ram Gopal Yadav.

Ram Gopal Yadav hit back, saying that Akhilesh Yadav was a bigger brand than the cycle and had the capability of becoming Prime Minister one day.

Sources in the Election Commission said, meanwhile, on Sunday that the SP’s cycle symbol faced the threat of being frozen before the Assembly polls in Uttar Pradesh if the commission was not able to decide which of the two party factions commands a majority in the organisation.

The side which has the support of the majority (50 per cent plus 1) MPs, MLAs, MLCs and delegates will gain an upper hand in the fight to control the party founded 25 years ago. The sources said the EC would have to decide who commands the majority in the SP before January 17, when the notification for the first phase of Assembly polls is issued. The election for phase one is on February 2.

With the notification, the process of filing nominations will start. The candidates from the Mulayam and Akhilesh camps cannot both fight the election on the cycle symbol at the same time, so therefore the EC will have to take a call before that date.

If the elections are imminent, the poll body does not have the time to verify the legislative majority of both factions. In this situation, it can pass an interim order asking both sides to pick a new party name and symbol.