Lynching alien concept to Bharat, has its references elsewhere: Bhagwat at Dusshera event

The RSS chief stated that different sections of the society should strive to increase goodwill, dialogues and cooperation among themselves. 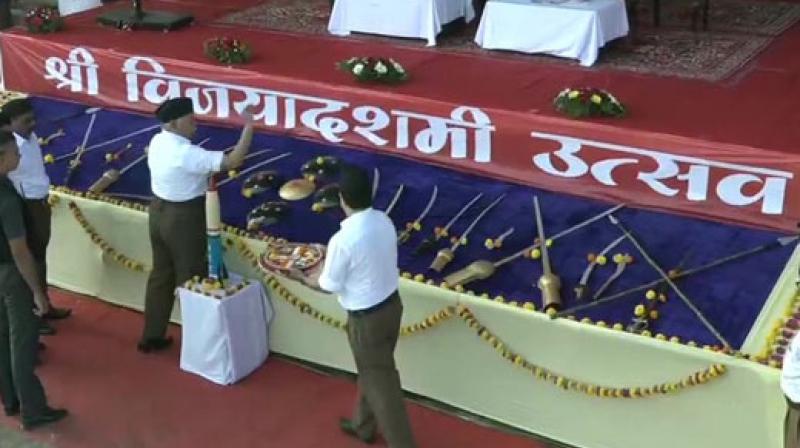 Nagpur: Rashtriya Swayamsevak Sangh or RSS chief Mohan Bhagwat on Tuesday performed 'shastra puja' (Ritual for weapons) at the annual Vijayadashmi festival in Maharashtra's Nagpur. He was seen giving a thumbs up while the RSS band performed after drill exercises by swayamsevaks (workers).

Bhagwat is expected to address the swayamsevaks (workers) at Nagpur's Reshimbagh ground and convey his message to the cadre of the organisation and its affiliates.

The RSS has also come up with its own Internet-based radio channel to broadcast Mr Bhagwat's speech at the event.

Dussehra holds a special importance for sarsanghchalaks (organisational heads) as the RSS was founded on this day in 1925.

Founder of IT company HCL Technologies, Shiv Nadar, is the chief guest for this year's event. Union Ministers Nitin Gadkari, Gen VK Singh (retd) and Maharashtra Chief Minister Devendra Fadnavis were among the others present at the event.

Rashtriya Swayamsevak Sangh (RSS) chief Mohan Bhagwat on Tuesday said that lynching is "alien to Bharat" and actually has its reference elsewhere.

"Branding some incidents of social violence as 'lynching' are actually meant to defame our country, Hindu society and create fear among some communities. Lynching is alien to Bharat and actually has its references elsewhere," Bhagwat said at an RSS event organised on the occasion of Dusshera.

Bhagwat said that diversity is an "intrinsic strength of our nation."

"But diversity of caste, creed, language and region are being used by vested interests to separate one from another, turning them to differences; imposing fabricated identities on manufactured separations," he said.

"It is essential to be alert in identifying plots of vested interest and counter them on intellectual and social planes... Alertness is a constant necessity," he added.

Bhagwat stated that the society must act by "remaining within the limits of Constitution".

"Whatever the difference of opinion be, howsoever provocative actions might have taken place, still the society must act by remaining within the limits of Constitution, reposing faith in the police and judicial system of the country," he said.

The RSS chief stated that different sections of the society should strive to increase goodwill, dialogues and cooperation among themselves.

"In today's context, it is absolutely important to work for the goodwill, harmony and cooperation among all sections of society. The Sangh Swayamsevaks have been making efforts to enhance this type of dialogues and cooperation," he said.