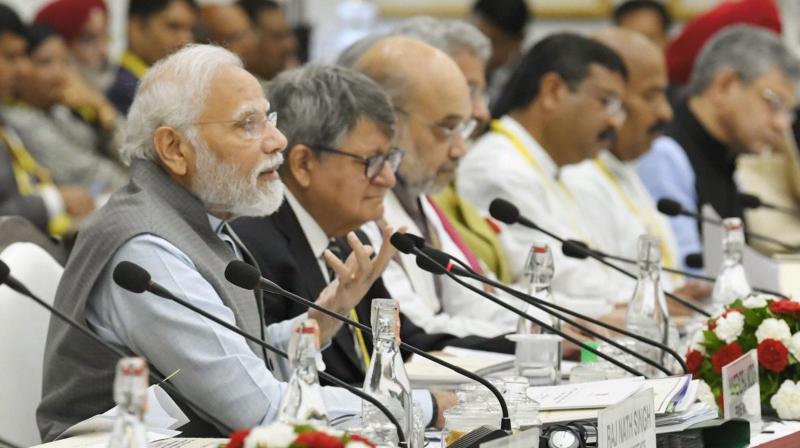 New Delhi: Prime Minister Narendra Modi on Sunday chaired the seventh meeting of the Niti Aayog governing council. This was the first physical meeting of the council since the onset of the Covid-19 pandemic, with the 2021 meeting held via video conferencing. The meeting was attended by 23 chief ministers, three lieutenant-governors and two administrators and several Union ministers, while Telangana CM K. Chandrashekar Rao and Bihar CM Nitish Kumar skipped the meeting. West Bengal CM Mamata Banerjee left the meeting early, citing the cyclone in her state. The meeting was moderated by defence minister Rajnath Singh.

At the end of the meeting, the PM said each state should focus on promoting its 3Ts — Trade, Tourism, Technology. He said the states must focus on reducing imports, increasing exports and identifying opportunities for the same in every state. “We should encourage people to use local goods wherever possible,” he said. ‘Vocal for local’ is not the agenda of an individual political party but a common goal,” he added.

Chandrashekar Rao had announced he will not attend the Niti Aayog meeting on Sunday, saying its meetings served no constructive purpose and that the participating chief ministers are given hardly a few minutes to express their views.

Crop diversification; achieving self-sufficiency in oilseeds to reduce import dependence; pulses and agri-communities, implementation of the National Education Policy in school and higher education; and urban governance were the main agenda for discussion during the meeting, though the states also raised the question of an increase in the states’ share in Central taxes and duties, citing the rising burden on their resources.

Chhattisgarh CM Bhupesh Bhagel sought a bigger share for the states in Central taxes. On the issue of the Goods and Services Tax (GST) compensation, Mr Baghel sought a five-year extension for the compensation paid to the state beyond June 2022, claiming that the state was facing a revenue shortfall due to the new tax mechanism.

The CM also urged the Centre to revise the royalty rate for major minerals, including coal, and sought a refund of the money deposited by the state government to the National Pension System (NPS) since November 2004 along with accruals in the interest of government staff.

The Niti Aayog members in a press conference said that Ms Mamata Banerjee had raised issues relating to her state. She welcomed the PM’s suggestion on states showcasing their achievements in the upcoming G-20 related events.

Odisha chief minister Naveen Patnaik said the Niti Aayog can take up the role of an ombudsman and can resolve disputes between the states and the Centre in implementation of Central schemes. He said Odisha has been historically neglected in the subjects that are on the Central list such as telecom, railways and banking, and urged the Central government to give special focus to Odisha.

“Today was the Niti Aayog’s seventh meeting and it was the first for me after becoming CM. It was unfortunate that no one has come from Punjab in the last three years. I went with detailed homework today and kept Punjab’s issues, the biggest being the variety of crops,” said Punjab CM Bhagwant Mann. “We demand MSP for farmers and demand a reformed committee as there are no stakeholders in it. I am happy with the meeting… All CMs kept their issues. The PM sat with us from 10 am to around 4.15 pm, noted points. We gave suggestions... India will be chairing the G-20 from December 1.  I have put forth Amritsar’s name before external affairs minister S. Jaishankar as the location where all meetings can be held. We will showcase our culture,” the Punjab CM went on to add.

On his part, the PM lauded the collective efforts of the states “in the spirit of cooperative federalism” as the force that helped India to emerge from the Covid-19 pandemic. In his inaugural address, the PM said India’s federal structure and cooperative federalism emerged as a model for the world during the Covid-19 crisis. He said that India had sent a powerful message to the developing nations of the world — that it is possible to overcome challenges with resilience despite resource limitations.

The PM also highlighted that the seventh meeting was a culmination of months of rigorous brainstorming and consultations between the Centre and the states to identify national priorities. “For the first time in India’s 75 years of independence, all of India’s chief secretaries met together in one place and deliberated issues of national importance for three days. This collective process led to the development of the agenda for this meeting,” the PM said.

The PM also spoke about India’s G-20 presidency in 2023 and called it a unique opportunity to show the world that India is not just Delhi… it is every state and Union territory of the country, adding that a mass movement should be built up around G-20. He also said there should be a dedicated team for the G-20 in the states to derive the maximum possible benefit from this initiative.

Speaking about this, Mr Jaishankar said: “The G-20 presidency presents a great opportunity and a great responsibility. For the first time in G-20’s history, India will host the G-20 meetings over the year, not only in Delhi but in every state and Union territory.”

Niti Aayog member Ramesh Chand said the states made suggestions about the diversification of crops. “The states were quite cooperative on diversification and achieving self sufficiency. One state suggested making MSP for oilseeds effective. Rajasthan said better irrigation can help in mustard cultivation in a big way.”