Sidhu had sent his resignation to Punjab Chief Minister Amarinder Singh on July 15. 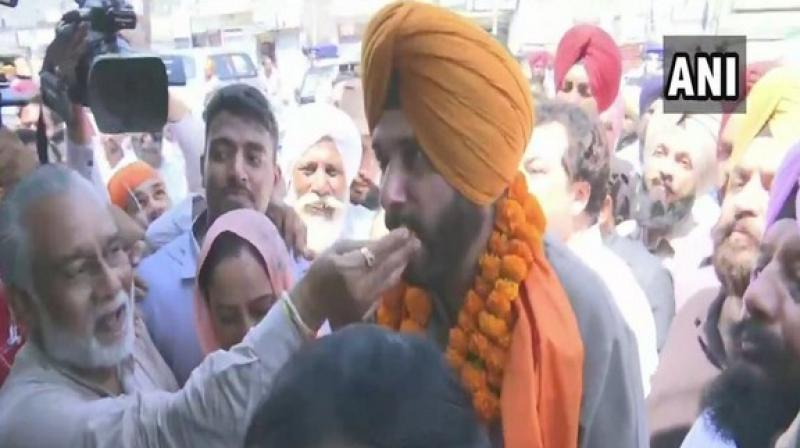 The cricketer-turned-politician had earlier submitted his resignation letter to Rahul Gandhi instead of Amarinder Singh. (Photo: ANI)

Amritsar: Former Punjab Minister Navjot Singh Sidhu and MLA from Amritsar East on Thursday visited his Assembly constituency for the first time after filing his resignation.

Sidhu had sent his resignation to Punjab Chief Minister Amarinder Singh on July 15.

Since then, his assembly seat had remained sequestered.

A week before the resignation, Sidhu was stripped of the portfolios of local government and Tourism and Culture and was given Power and Renewable Energy Resources portfolio.

The cricketer-turned-politician had earlier submitted his resignation letter to Rahul Gandhi instead of Amarinder Singh.

Singh and Sidhu had been at loggerheads since his controversial visit to Pakistan for the swearing-in ceremony of Imran Khan last year where he had hugged Pak Army Chief leading to a huge controversy back home.

The rift further widened during the General Elections when Sidhu and his wife Navjot Kaur Sidhu accused Amarinder of having a hand in denying ticket to her from either Chandigarh or Amritsar Lok Sabha seat.

On June 6, the Congress leader was stripped of the portfolios of Local Government and Tourism and Culture by Chief Minister Singh after the party won eight parliamentary seats out of 13 in Punjab.