H D Kumaraswamy became the chief minister heading the coalition in which he was the minor partner. 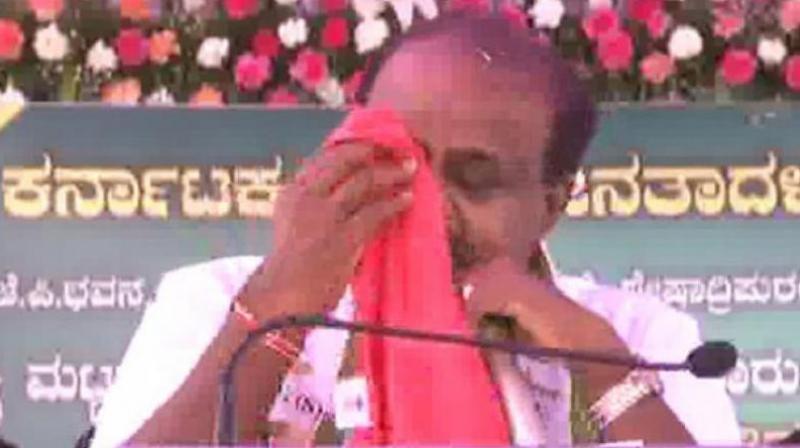 The alliance walked on a rough patch, since inception, with the JD(S) complaining too much of interference from the grand old party. (Photo: ANI)

Bengaluru: The political turmoil in Karnataka has been making headlines as the state is eyeing for a government collapse or as the Congress-JDS are claiming, a cabinet reshuffle may be in the queue.

With the resignation of 15 MLAs from the coalition, the coalition’s strength stands at 105 comprising 69 Congress MLAs and 34 JD(S) MLAs, supported by one independent and one BSP MLA, as against the Bharatiya Janata Party’s 105 legislators.

Kumaraswamy had anticipated the journey to be bumpy and complained about it on numerous occasions. After he was elected as the chief minister, he said he was at the ‘mercy’ of the Congress and not the people of Karnataka.

Later, in the month of July last year, Kumaraswamy broke down at an event in Bengaluru. “You are standing with bouquets to wish me, as one of your brothers became CM and you all are happy, but I am not,” Kumaraswamy said.

Comparing himself to Lord Shiva, he further said, “I know the pain of coalition government.  I became Vishkanth (Lord Shiva) and swallowed the pain of this government,” he said.

Later in January this year, Kumaraswamy almost cried while addressing the party workers. He described himself as a ‘clerk’ working on the directions of the Congress party. He said he was working under enormous pressure and the Congress leaders expected him to behave like their subordinate.

The alliance walked on a rough patch, since inception, with the JD(S) complaining too much of interference from the grand old party.

With just a little more than a year of government’s formation, the cabinet has resigned and the state stares at a full cabinet reshuffle.

Meanwhile, the BJP has asked Kumaraswamy to resign as the party claims that he doesn’t have majority.