The JD(S)-Congress government in Karnataka is facing a crisis after 12 lawmakers submitted their resignations on Saturday. 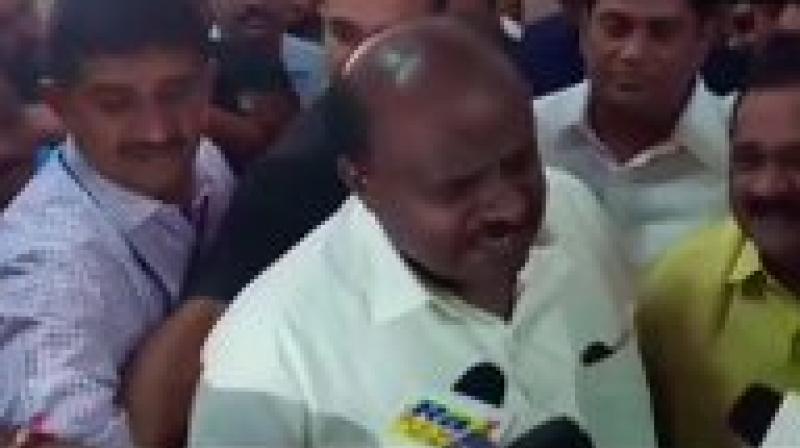 Ten of the MLAs who resigned flew by the chartered plane to Mumbai. They have been lodged at a hotel there. (Photo: File)

Bengaluru: The JD(S)-Congress government in Karnataka is facing a crisis after 13 lawmakers of the alliance submitted their resignations to the state Assembly Speaker on Saturday.

Both the JD(S) and the Congress have been plagued by dissension over allocation of ministerial berths and distribution of Lok Sabha poll tickets. The cracks became deeper after the BJP swept the parliamentary election in the state.

Ten MLAs who resigned flew by a chartered plane to Mumbai on Saturday evening. They are staying at the Sofitel Hotel. While Congress blamed the BJP for the crisis, BJP on its part has denied any role in it.

The troubled ruling coalition, which has 118 MLAs in the 224-member Assembly, faces the risk of losing its majority in the House if the resignations are accepted.

Here are the latest updates:

15.30 pm: Karnataka Independent MLA Nagesh, who resigned earlier in the day, has reached Sofitel hotel in Mumbai where other rebels Karnataka MLAs are staying.

15.00 pm: All Janata Dal Secular ministers resigned after Chief Minister H D Kumarawamy announces that the Cabinet would be restructured soon. "I am not anxious about the recent developments," he said of the crisis that has engulfed his government.

13.14 pm: Defence Minister Rajnath Singh in Lok Sabha stated that BJP has nothing to do with what is happening in Karnataka. BJP has never indulged in horse trading.

Earlier, after a meeting with Chief Minister G Parameshwara, Congress leader D K Suresh had said all Congress ministers would resign, reportedly to accommodate the demands of rebel lawmakers.

12.45 pm: Karnataka Minister Zameer Ahmed Khan said, "At least 6-7 MLAs who are in the BJP camp would be back by evening."

11.45 am: BJP leader Shobha Karandlaje, after a meeting with BJP leader B S Yeddyurappa, said, "Karnataka Chief Minister H D Kumaraswamy should resign immediately. He has lost the majority. Congress MLAs have already resigned. He should make way for another government."

11.20 am: Karnataka Minister and Independent MLA Nagesh resigned from his post and withdrew support to the H D Kumaraswamy-led coalition government.

Nagesh, who was recently inducted into the ministry as small scale industries minister, met Governor Vajubhai Vala at the Raj Bhavan here and submitted the letter. The move comes amid reports that ministers in the coalition government will be asked to step down to make way for disgruntled MLAs who have resigned as legislators.

After the meeting, Congress firefighter D K Suresh said, "There is no infighting. Our leaders are in touch with those who have resigned. The government is stable."

He blamed the BJP for wrecking the coalition. "BJP's national leaders are behind this. BJP does not want any opposition in the state or the country. They are ruining democracy," he added.