If this is a part of the official policy of the police, it appears to be a tactic to coerce journalists into not reporting facts, says KPC 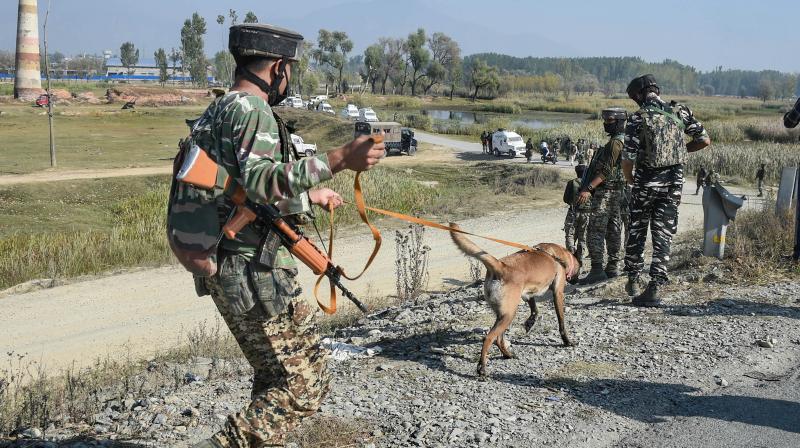 No operational content should be carried that was “likely to incite violence or contains anything against the maintenance of law and order or which promotes anti-national sentiments". — Representational image/PTI

Srinagar: The Jammu and Kashmir police has banned the “live” coverage of all encounters between the security forces and separatist militants and of “law and order situations”, but used a somewhat obnoxious phrase to justify its plan to keep reporters and photographers away.

“Don’t interfere in the professional and bona fide duty of police and the security forces at encounter sites,” IGP Ajay Kumar told the media.

Responding to that, the Valley’s media fraternity said that reporters or camerapersons do not “interfere” in the work of the security forces but only discharge their professional duty while covering encounters, their aftermath or law and order situations.

Farooq Javed Khan, president of the Kashmir Photographers’ Association, said: “First of all, we have to verify if the statement attributed to the IGP in identical reports circulated by local news agencies is really his. And if he has used the phrase ‘don’t interfere’, then we would say it is obnoxious and, therefore, unacceptable.” He added: “While covering encounters and law and order situations we strictly follow the rulebook and never exceed our brief. If we are not allowed to discharge our professional responsibility, then what are we there for?”

The Kashmir Press Club and various Valley-based media organisations, in a joint statement, said the IGP’s statement has created anguish among the media. “If this is a part of the official policy of the police, it appears to be a tactic to coerce journalists into not reporting the facts on the ground. It also seems a part of the string of measures by the authorities to suppress freedom of the press in the region. Summoning journalists to police stations, filing FIRs and seeking informal explanations for their work has intensified in the past two years”, the statement said.

News agencies GNS and KNO reported that Mr Kumar advised media persons not to come close to encounter sites or “law and order” situations. “The mediapersons should not carry any live coverage of any encounter or law and order situation. Freedom of speech and expression is subject to reasonable restrictions that should not violate other persons’ right to life guaranteed under Article 21 or put national security in jeopardy. Do not interfere in the professional and bona fide duty of the police and security forces at encounter sites.”

He was also quoted as saying that no operational content should be carried that was “likely to incite violence or contains anything against the maintenance of law and order or which promotes anti-national sentiments.”

The statement of the KPC and media organisations said: “Journalists in Kashmir have worked under tremendous pressure for the past several decades and despite facing threats to life, liberty and property, they upheld the principles of journalism and reporting.” The statement also adds: “The media in Kashmir is aware of journalistic guidelines and ethics for situations like encounters, law and order situations, and have always upheld these principles. Covering and reporting law and order situations in the region is one of the basic requirements for most news organisations, and hence an essential part of the professional role of the media. Barring them from covering such events would mean stopping them from delivering their professional duties.”

The statement further stated: “Press freedom is the cornerstone of a democracy and any attack on it undermines the democratic setup, of which the media is the fourth pillar. Any such attack on press freedom and journalism is highly distressful. In this backdrop, journalist bodies in Kashmir urge Mr Kumar to put the record straight and clarify the statement attributed to him.”

It is pertinent to note that images of the security forces targeting private houses and other buildings in which militants were holed up during counter-insurgency operations went viral recently. It was alleged that the security forces used flame-inducing gunpowder, mortar shells and IEDs in such actions and the resultant devastation has been seen by critics as a step to punish the alleged abettors and supporters of militants.

The security forces’ officials reject this criticism as unwarranted, and say it is unavoidable collateral damage, which they claim they try to keep under check. They also claim that the media’s presence, particularly that of photographers and videographers, further provokes protesters near the encounter sites and leaders to more stone-pelting for the benefit of the cameras. Last week, a video showing a policeman kicking a press photographer near an encounter site in southern Pulwama district also went viral and evoked much criticism of the police.