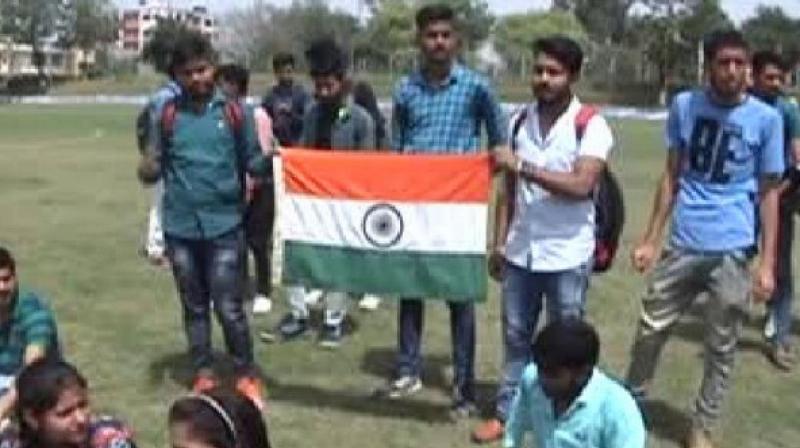 ABVP staging a protest at the University of Jammu. (Photo: Twitter | ANI)

Jammu: Akhil Baharatiya Vidyarthi Parishad (ABVP) activists on Saturday stopped the ongoing Inter-Universities Sports Meet at the University of Jammu over the alleged disrespect to the national anthem at the opening ceremony by students of Kashmir University.

ABVP leader Avatar Singh Jasrotia said that several students of Kashmir University had indulged in a seditious act by disrespecting the national anthem on March 5.

"We had given 48-hour ultimatum to Jammu University officials to conduct an inquiry in the matter and take an apology letter from the students of Kashmir University, but the university administration didn't pay any heed to our demand, and hence, we were forced to halt the sports meet," said Jasrotia.

"If the Jammu University administration takes this serious matter lightly then we won't sit quiet and will shutdown the university," he threatened.

An ABVP girl participating in the protest said, "We understand that they (Kashmiri students) have not been taught how to respect the national anthem but what we are demanding is that they should once sing the national anthem with us and tender a written apology. If they don't do so then the Kashmir University team should be disqualified."

A Kashmiri student, who is participating in the sports meet, said that nobody had disrespected the national anthem but now they (ABVP) are trying to teach us how to stand or sit.

A university official said that the institution is expecting full cooperation from the students so that the event is restarted peacefully.