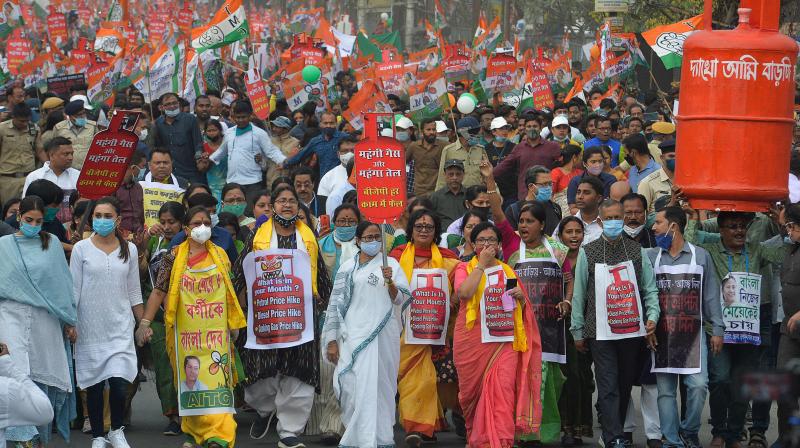 Chief Minister of West Bengal Mamata Banerjee (C) along with Indian supporters of All India Trinamool Congress (AITC) take part in a protest rally against the rise in prices of petroleum products, in Siliguri on March 7, 2021 ahead of the upcoming West Bengal's legislative assembly elections. (Photo: AFP)

Kolkata: West Bengal Chief Minister Mamata Banerjee has sought Prime Minister Narendra Modi to reveal his worth in terms of “price” while branding him the “biggest extortionist”, in her vitriolic retaliation to his blistering attack on her on Sunday.

The angry Trinamul supremo also accused the Prime Minister and his deputy, Union home minister Amit Shah, of being the “only syndicate” in the country before daring Mr Modi to face her in a “one-to-one” on the eve of the Assembly election in the state.

Spewing venom at the Prime Minister at Siliguri, in North Bengal, after leading a protest rally there against the steep hike in fuel prices, Mamata said: “You first have to explain why there has been fuel and LPG price hikes daily. LPG cylinders need to be provided free of cost. People of the state want to know that before they cast their vote. The Bengal government provides rice free of cost while one has to buy LPG cylinders at Rs 900 to cook food. Narendra Modi, what is your price? Five states are going to the polls in the coming days. You will face defeat everywhere.”

In an oblique reference to Modi, she claimed: “Whenever he visits Bengal, he levels allegations of extortion. You are the biggest extortionist. If a poor man indulges in extortion, it is merely Rs 10. What is the amount when you and your cronies do it? What is the amount of extortion in the sale of the Railways, SAIL, Coal India and Air India? What syndicate you talked about? India knows only one syndicate is working —  Narendra Modi and Amit Shah. There is no other syndicate.” Throwing a challenge to the Prime Minister, Mamata added: “When you address an empty Brigade, I, being a street-fighter forever, stay on the road which shows me the way. I want to continue as a commoner. Face me in a one-to-one if you have the guts.”

A day before the International Women”s Day celebrations, the Trinamul chief further targeted the Prime Minister over his criticism of her government over the violence against women in the state, pointing out the incidents of rape in BJP-ruled Uttar Pradesh. She also ridiculed the Prime Minister for being publicity-hungry over the display of his photo on everything — from the Covid-19 vaccine certificates to space programmes.