The developmental projects here picked pace after you (people of Uttar Pradesh) made Yogi Adityanath the chief minister," he said. 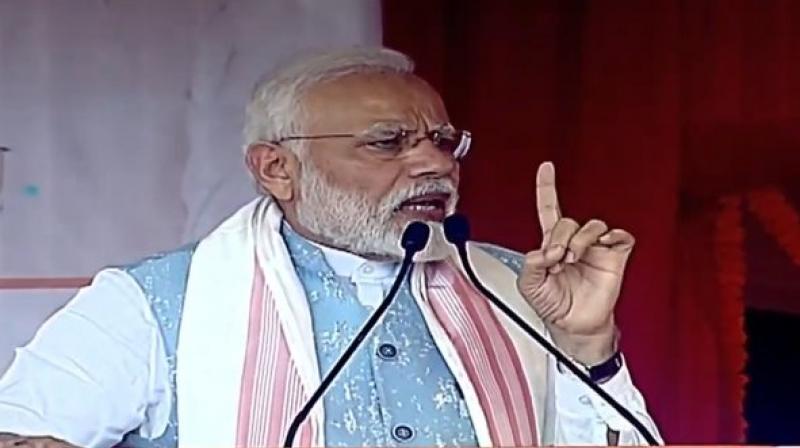 Varanasi: Prime Minister Narendra Modi Friday claimed that "non-cooperation" by the previous Samajwadi Party government in Uttar Pradesh was responsible for the delay in start of a beautification project in his Lok Sabha constituency. He was addressing a gathering here after laying the foundation stone for the Kashi Vishwanath Temple's approach road and its beautification. "In the first three years there was non-cooperation of the state government. The developmental projects here picked pace after you (people of Uttar Pradesh) made Yogi Adityanath the chief minister," he said. "Had there been cooperation earlier, we would have launched the project instead of laying the foundation," Modi said. Attacking previous governments, the prime minister said, "In the past 70 years no government thought of Baba (Lord Shiva) and were silent. They took care of themselves but not of this place." Noting that it was his "pleasure" to have initiated the work at Kashi Vishwanath, he said, "I have dreamt for a long time to work for this place. When I was not in politics I came here several times and used to think that something should happen here." "Bhole Baba ney tai kiya hoga baatein bahut karte ho yahan aao kuch karke dikhao ," (Lord Shiva must have decided that you talk much, so now you should come here and do something)," he said, adding that due to the blessings the fulfillment of his dream has started. After offering prayers at Kashi Vishwanath Temple, he said that he was blessed to be associated with the project of Kashi Vishwanath Dham. About the beautification project, Modi said this is " mukti (freedom) for Kashi Vishwanath Dham" which was surrounded with encroachment. He said the Kashi Vishwanath Temple has survived the vicissitudes of centuries and praised Queen Ahiyabai Holkar for her work on the shrine over two centuries ago. He said not much thought had been given by those in power to the area around the temple. "For the first time, we acquired nearby buildings, removed encroachments after which 40 ancient temples came to the fore. Many of them were encroached , kitchens were set up and people were living there," he said. Modi said the entire temple complex is now in the process of rejuvenation and the results are becoming visible, with a direct link being established between the Ganga river and Kashi Vishwanath temple. He said this project will become a model for similar projects elsewhere and give a new global identity to Kashi. The prime minister not only complimented the officers involved with the project for performing their task with devotion, but also thanked all the people who had property around the temple and allowed its acquisition for the project. It was difficult to take people into confidence to give their properties and ensure the project does not take political colour , he said. "I thank people of Kashi, who gave their properties for Baba. This is the biggest ' daan ' they have given for Baba," the prime minister said. "I have seen a lot of government employees as I was CM for a long time. But I want to say with pride that the team of officers deployed here by Yogi ji is doing work with 'Bhakti' (devotion) and ' sewa bhav '," Modi said. Stating that the Kashi Vishwanath temple was "targeted by enemies", he said they tried to destroy it but it again took "rebirth due to the faith" of people. "When Gandhiji came here, he was pained why is this place is like this. In his address in the BHU, he expressed his thoughts," Modi said, suggesting the university should make a case study of the project so that when it is completed the world can know how it happened. "We will also try to trace the history of the 40 temples discovered here and the government will also take care of them," the PM said, adding the project will be a model for "protection and preservation" of temples and a combination of modern technology with ancient faith. "It will give new identity to Kashi in the world. Maybe it's in my fate. In 2014, when I came here I said ' mai aaya nahi mujhe bulaya hai' (I did not come here on my own, I was summoned). Maybe I came here for this work," he said. Earlier, the prime minister visited the Kashi Vishwanath temple and also inspected the project site. During his brief stay in his constituency, Modi attended the National Women Livelihood Meet 2019 at Deendayal Hastkala Sankul and distributed appreciation letters to five Women Self Help Groups, whose members shared their experiences with the prime minister. Women SHGs aided by Deendayal Antyodaya Yojana - NRLM, Uttar Pradesh handed over a cheque to the prime minister for contribution to the 'Bharat Ke Veer' Fund. Addressing a gathering at National Women Livelihood Meet, Modi said he could carry out development projects now that "middleman and corruption have been abolished and every penny is spent on people". "Now there are no middleman and corruption. Modi did not have to take anything for himself. If he takes, what will he do...125 crore people of the country are my family. Keep trusting me," he said. Listing the schemes launched by his government for women, Modi said these were playing an important role in the making of a new India.