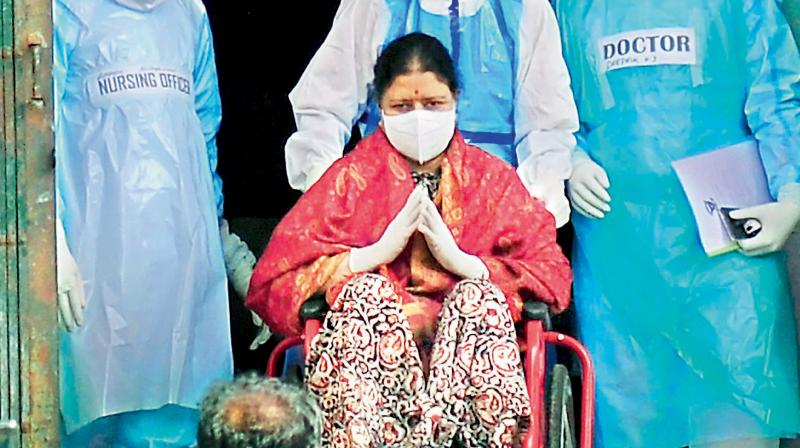 Sources say trouble is anticipated if Sasikala travels with the party flag on the car when she enters Hosur in Tamil Nadu from Attibelle in Karnataka. (Photo: DC)

Chennai: Vivekanandan Krishnaveni Sasikala’s return to her home state after four years in a Bengaluru jail has created a sense of anticipation in many and even fear in the minds of the mandarins of Tamil Nadu’s ruling party. If Monday looms like some kind of D-Day for the AIADMK in state politics, it is a reflection of how the party had become the personal fiefdom of former CM J. Jayalalithaa and even more so that of her confidante, who was the virtual regent operating from her residence in Poes Garden until convicted in a case under the Prevention of Corruption Act.

“To give her a warm welcome is our only aim. I trust the police will remain neutral,” said T.T.V. Dhinakaran, Sasikala’s nephew and AMMK party’s honcho, on Sunday. His comments about the kind of welcome planned for Sasikala, who sources say is likely to come in a motorcade of 500-1,000 cars from a resort in Bengaluru to her niece’s residence in T. Nagar in Chennai, come in the wake of complaints to the state’s DGP by AIADMK ministers and other leaders about her posing a “threat” to law and order.

The government’s anxiety was apparent as a strange parade of ministers dropped in at the DGP’s Marina Beach office, preferring oral complaints about Sasikala’s use of the AIADMK party flag on her car as she emerged from the Victoria Hospital in Bengaluru, where she was admitted for a touch of Covid-19. A point of interest about her return will be whether that flag will continue to flutter on the bonnet in one of Jayalalithaa’s Toyota MUVs which may carry Sasikala on her journey home.

The symbolism of the car and flag was high on her agenda when she came out of hospital. That pushed Tamil Nadu minister D. Jayakumar to threaten action against Sasikala if she continues to use the party flag. The chances are that she will enter Tamil Nadu with the flag as this is the challenge she can throw at her former party now. When she departed for Bengaluru, she was general secretary of the party, and was subsequently removed by the EPS-OPS combine, but without any notice being served on her. Legal challenges may be planned on these aspects in the future.

Sources say trouble is anticipated if she travels with the party flag on the car when she enters Hosur in Tamil Nadu from Attibelle in Karnataka. Dhinakaran’s AMMK party has prepared a big reception there. In Chennai, Sasikala may skip the AIADMK headquarters and the (closed) Jaya Memorial on Marina Beach and head straight to Ramavaram Gardens to pay homage to AIADMK founder MGR at his old home to convey a political message and try to pin relevance to her coming back to Chennai.

Jayakumar has threatened action if Sasikala tries to enter the party HQ on Lloyds Road, where security has been beefed up, so too at the old Jaya residence in Poes Garden, which is now a museum and memorial. What the AIADAK fears is unknown. Their biggest threat would not be lengthy legal challenges in court but a rebellion from within the ranks with Jaya-Sasi loyalists walking off on being tempted by the old Poes Garden’ path of allegiance.

Sources say a challenge could be mounted for the party headquarters on Lloyds Road that could be in the names of old trustees and complications could arise if legal questions are raised now. Right now, Sasikala is not a legal entity in the party and her fight would have to begin from zero in terms of occupation. An AIADMK minister was quoted as saying that the AMMK and Sasikala are the “DMK’s B Team” in the current political scene as her role could be disruptive of the parent party AIADMK now fighting for re-election after two terms.

Sasikala’s controversial role in party affairs was well established as she was the puppet master who pulled strings to the extent of making her Thevar caste mate O. Panneerselvam chief minister and then brought in Edappadi Palaniswami when OPS rebelled. Her control of party figures made her a parallel source of power that often exceeded that of Jaya and even in interceding in the state administration through the bureaucracy.

The obsequious manner in which the state’s male politicians kowtowed to the woman on the throne and her aide behind it came to an end only on the day Sasikala motored to Parpanna Agrahara in February 2017. The two -- CM and deputy CM -- would often rush to New Delhi and complain to the Prime Minister, who once rebuked one of them, and reminded him he was in fact the CM of a state and he had the home department and the police with him. Their past behaviour was in keeping with how beholden they were to the all-powerful regent who changed things only when she tried to ascend the throne herself.

The last four years and a bit since Jayalalithaa’s death in December 2016 and the incarceration of Sasikala were a sea change from the de facto and de jure Jaya-Sasikala regimes. All that will change soon as Sasikala comes back to Chennai and begins another innings in politics in which she is forbidden to stand for elections for six years more as she was convicted under the PCA for four years, but could still continue to play her old role as the power behind the throne.