To fight corruption, UP must remove corrupt govt: Modi hits out at SP

The PM said that the politically crucial state can become India's 'Uttam Pradesh' if people will choose the right government. 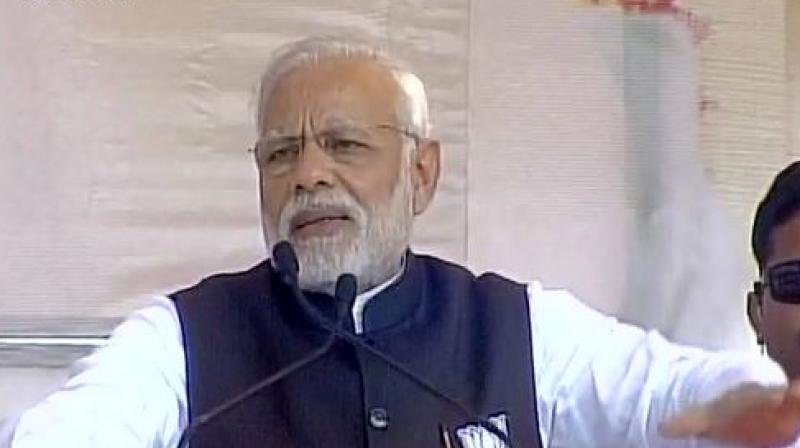 Ghaziabad: Taking a dig at the opposition for criticising government's demonetisation move, Prime Minister Narendra Modi on Wednesday said some people have problem with his fight against black money and corruption.

"Some people are in a problem because of my fight against black money and corruption, even after so many days they still talk about it," said the Prime Minister while addressing a rally in Ghaziabad.

The Prime Minister further said that corruption has eaten the country like termites.

Launching a scathing attack at Samajwadi Party, the Prime Minister further said the Uttar Pradesh ruling party has been sheltering criminals in the state, adding that the politically crucial state can become India's 'Uttam Pradesh' if people will choose the right government.

"Samajwadi Party has been sheltering criminals and goons. Today, in Uttar Pradesh, after the sun sets a woman cannot step outside confidently on the streets as they are not safe in the state," the Prime Minister said while addressing rally in Ghaziabad.

He further said that rapes and murders are unaccounted for in Uttar Pradesh and the Samajwadi Party is neither worried, nor does it consider it their responsibility.

"The Samajwadi Party, which has been in power for last five years, it is their duty to answer the people of Uttar Pradesh about the work they have done," Prime Minister Modi added.

Asserting that the upcoming state assembly election is to bring development in Uttar Pradesh, Prime Minister Modi stated that if one's intentions are clear, it is not difficult to bring law and order in the state.

"If Bharatiya Janata Party assumes power in Uttar Pradesh we will scrutinise the scams in employment sector and will give jobs to unemployed people," he added.