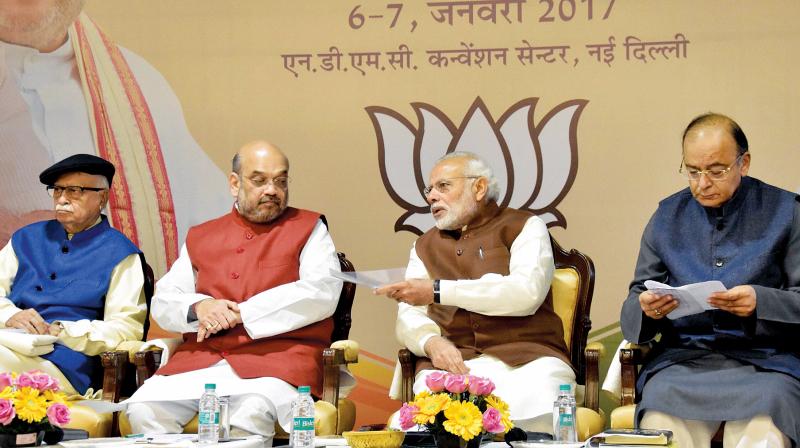 New Delhi: The BJP’s plan to consolidate the economically backward votebank ahead of the forthcoming Assembly elections in five states — including Uttar Pradesh and Punjab — became evident as Prime Minister Narendra Modi asserted on Saturday that his government was committed to improving the lives of the poor. Sounding confident, Mr Modi said that the situation was in “our favour in the elections.”

Addressing the BJP’s national executive on the second and concluding day, Mr Modi said his government’s demonetisation decision was a long-term tool to fight black money and corruption and improve the lives of the poor.

Invoking a Sanskrit shloka to assert that he did not covet power, heaven or a second life, but longed to end people’s sufferings, Mr Modi said, “Serving the poor is serving God.”

The PM’s almost one-hour-long speech was themed on the poor and his government’s various initiatives to empower them.

This was after the BJP hailed as historic the decisions of surgical strikes on terror launch pads across the LoC in September and demonetisation in November.

Mr Modi also saluted the “inner strength” of people for responding to his appeal and braving problems after he announced demonetisation on November 8 that led to a cash crunch across the country.

While referring to the Assembly elections in February and March, the PM expressed confidence that the BJP would win, but  also  indicated  that only those who “deserve will get party tickets”, and asked party leaders to refrain from lobbying for their relatives.

Perhaps learning lessons from the poll debacle in Bihar, where almost all central ministers and senior leaders from the state and the central teams camped, the BJP, sources said, has this time asked all its state units to depute only “capable and effective leaders” to election duties.

The party has asked its state units to send a list of these leaders before they are asked to camp in the election-bound states in phases. BJP general secretary (organisation) Ramlal, senior RSS leader Krishna Gopal and the party’s state organisational secretaries held a meeting on the issue after the national executive concluded.

Briefing the media about Mr Modi’s address, Union minister Ravi Shankar Prasad quoted the PM as saying that “main garibi mein janma hoon aur jiya hoon” while asking the cadre to welcome criticism, and that allegations should not worry them as their “inner truth” and resolution will “guide them on the righteous path.” Opposition parties have been levelling corruption charges against the BJP leadership following the note ban.

Pitching again for electoral reforms, the PM sought a consensus among parties, asserting that the BJP would play a lead role in making political funding transparent as demonetisation and India’s digital economy “have ushered in a more transparent era.”

“The poor of our poor country have accepted this historic decision (demonetisation). They have accepted that it is an effective step to end social ills including corruption....Accepting the hardships which came with the decision, they have welcome this historic step toward a great change,” Mr Modi said, adding that the country had seen society’s strength in the last two months.

Some people were concerned about improvement in their life style but the priority of the government was to change the quality of the life of the poor, he said.

Mr Prasad said the PM asserted that the poor and poverty were not a tool for winning elections, and that the BJP did not look at them through vote-bank glasses.

Citing various government measures, including Jan Dhan accounts, Beti Bachao Beti Padhao, Swachh Bharat, Mr Modi said the poor had the inner strength to overcome poverty and his government had been working to empower them.

Mr Jaitley said black money had been deposited in bank accounts. “It has lost its anonymity... This will lead to higher revenues… bigger and cleaner GDP,” he said.

“The bold and historic decision underlined a firm and visionary leadership, which puts the country above party and individuals. The notes hidden in mattresses, something people would say symbolically, are now in banks. It will boost development,” said Ms Sitharaman.