India   Politics  07 Dec 2019  Pak made terrorism its 'state policy', prepare yourself to face it: Rajnath to cadets in passing out parade of IMA
India, Politics

Pak made terrorism its 'state policy', prepare yourself to face it: Rajnath to cadets in passing out parade of IMA

Defence Minister further added that the Cente has adopted a multi-pronged strategy against terrorism, which has given positive results. 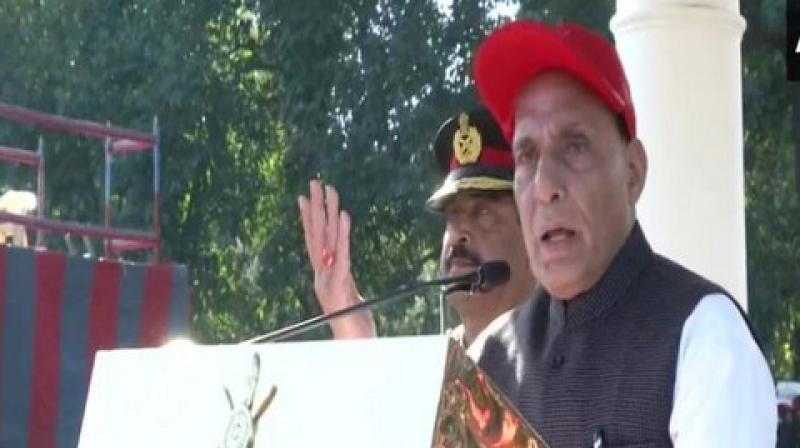 Union Defence Minister Rajnath Singh on Saturday said that Pakistan has made terrorism its 'state policy' and is not 'mending its ways'. (Photo: ANI)

Dehradun: Union Defence Minister Rajnath Singh on Saturday said that Pakistan has made terrorism its 'state policy' and is not 'mending its ways'.

While addressing the passing out cadets here, Singh said, "Pakistan has made terrorism its state policy. They have fought four wars and lost all of them but they are a strange neighbour and not mending its ways. So, you (cadets who are passing out) have to prepare yourself to face terrorism."

"When you were walking in front of my eyes with your measured and padded steps, I was seeing a picture of a safe and golden India in you. Your ability to walk step by step and shoulder to shoulder helps in achieving any major goal. This ability makes our army and armed forces strong," he added.

Defence Minister further added that the Central government has adopted a multi-pronged strategy against terrorism, which has given positive results.

"The entire world knows that if the mastermind of 9/11 and terrorist organization Al Qaeda was found somewhere, it was found in Pakistan. The whole world also knows that the people of Lashkar-e-Toiba, who carried out 26/11 attacks, are sitting there in Pakistan," said Singh.

"Despite this, there is a need to be vigilant always about the threat of terrorism because in Pakistan, along with the terrorism state policy, there exist non-state actors who are extremely powerful that their role in Pakistan's theatre is nothing more than that of puppets," he added.

Singh asserted that the people who died in 26/11 Mumbai attack and their families will get justice on the day when the people who carried out the attack, will be brought to an end.

"The 166 people who died in 26/11 attack and their families will get justice on the day when those who carried out the attack will be brought to their final conclusion," said Singh.

The Defence Minister also stated that the government has perceptional differences with China regarding the border as the clear demarcation of the border has been pending for a long time now. Therefore, the Indian Army will always have to act with valour as well as discretion on the Northern Front and North-Eastern Front.

"The Indian Army has proved this many time in the last few years, when required it worked with discretion and did confrontation avoidance and when a different situation was created in Doklam, the Army showed strong will power," said Singh.

Singh on Friday arrived at the Indian Military Academy (IMA), Dehradun. The passing out parade is being held on the occasion of Armed Forces Flag Day.