The home minister said the government would not talk to Hurriyat Conference, but was ready to speak to the people of Kashmir. 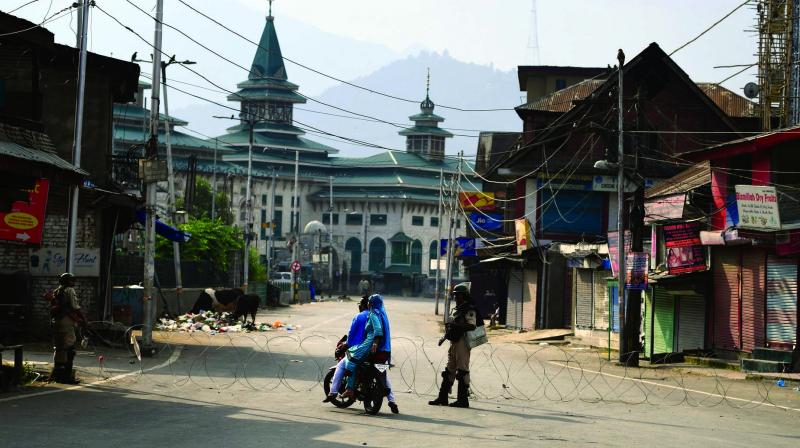 Security personnel stop a couple on a motorbike during a curfew in Srinagar on Tuesday. (Photo: AFP)

New Delhi: Taking a belligerent stand, home minister Amit Shah on Tuesday ruled out the possibility of talks with the Hurriyat Conference, and told the Lok Sabha that India will continue to claim the territories of Jammu and Kashmir under the occupation of Pakistan, commonly referred to as Pakistan-occupied Kashmir (PoK).

Replying to a debate on the resolution for abrogating some provisions of Article 370 and the Jammu and Kashmir Reorganisation Bill 2019, Mr Shah also said the government would have no hesitation in restoring statehood to Jammu and Kashmir when normality returns. “India will continue to claim Pakistan-occupied Kashmir... We are ready to give our lives for it,” he said.

“Kashmir is an integral part of India, there is no doubt about it. When I say Jammu and Kashmir, I include Pakistan-occupied Kashmir and Aksai Chin, both are included in the territorial boundaries of Jammu and Kashmir,” the home minister emphasised.

The home minister said the government would not talk to Hurriyat Conference, but was ready to speak to the people of Kashmir. The resolution and the bill had been earlier approved by the Rajya Sabha on Monday.

The government had Monday revoked some provisions of Article 370 to take away Jammu and Kashmir’s special status, and proposed bifurcation of the state into Union territories of Jammu and Kashmir, and Ladakh, a bold and far-reaching decision that seeks to redraw the map and future of a region at the centre of protracted militancy.

Mr Shah later withdrew the Jammu and Kashmir Reservation (2nd Amendment) Bill 2019, saying that the clauses incorporated in the legislation will automatically come into effect in the two new Union territories. The bill will also be withdrawn from the Rajya Sabha.

Prime Minister Narendra Modi hailed the passage of bills on Jammu and Kashmir in Parliament as a “momentous occasion” in parliamentary democracy, and said a new dawn awaits the state now free from the “shackles” of vested interest groups.

“Together we are, together we shall rise and together we will fulfil the dreams of 130 crore Indians! A momentous occasion in our parliamentary democracy, where landmark bills pertaining to Jammu and Kashmir have been passed with overwhelming support!” he tweeted soon after the Lok Sabha passed the bills.

Moving a resolution for revoking provisions of Article 370 and the Jammu and Kashmir Reorganisation Bill 2019, Mr Shah also said there has been a longstanding demand for giving Union territory status to Ladakh, which was fulfilled by the Narendra Modi government.

“Ladakh, including Aksai Chin, will be a Union territory, Both Hill Councils will continue to be active,” he said.

Responding to a query on whether the new provisions would also include PoK, Mr Shah said: “We will give our lives for it.” Aksai Chin is a vast area in Ladakh which is currently under Chinese occupation.

The home minister said the “President has signed a Constitution Order 2019 yesterday (Augst 5), ordering application of all provisions of the Indian Constitution to Jammu and Kashmir, this means Article 35A is removed”.

The House also saw an uproar, with Congress members and Mr Shah involved in a war of words. Congress’ Lok Sabha leader Adhir Ranjan Chowdhury questioned the legality behind introducing these bills. “You say it is an internal matter. The UN has been monitoring the situation since 1948. Then there is the Shimla Agreement and the Lahore Declaration. Whether this is a bilateral matter or an internal matter..” Mr Chowdhury asked, triggering opposition from the treasury benches. Mr Chowdhury later said he needed a clarification on the issue.

Mr Shah said: “These (legislation on J&K) are not only legally right but also constitutionally right.”

When some Opposition members asked why was the home minister appearing so aggressive, Mr Shah replied: “I am aggressive because you think PoK is not a part of India.”

Manish Tewari of the Congress said that if Jammu and Kashmir, Junagadh and Hyderabad are a part of India, then it was because of Pandit Jawaharlal Nehru. To this, Mr Shah said it was an example of discrediting the contribution of Sardar Vallabbhai Patel. “This House has seen very historic decisions, this bill will be written in golden letters,” Mr Shah added.

Dismissing the Opposition’s charge that introduction of the bill and the resolution were a violation of the rights of the people, he said nobody could stop us from
introducing a resolution on Kashmir in Parliament. The home minister also said the UT of Jammu and Kashmir will have an Assembly with a chief minister and MLAs.

Fulfilling an electoral promise of the BJP less than 90 days after the Modi 2.0 government took office, Mr Shah had announced the decision in the Rajya Sabha, which approved both the resolution and the Jammu and Kashmir Reorganisation Bill on Monday.

Mr Tewari said the move was a “constitutional travesty”. He said changing the boundaries of any state without approval of its state legislature was not in the spirit of Parliament. “Without the approval of the Constituent Assembly, you cannot do this. This is a wrong interpretation of the Constitution,” he said, adding that it was perhaps for the first time that the status of a state had been watered down and made into an UT.