Tejashwi has everything it takes to survive in murky world of politics. 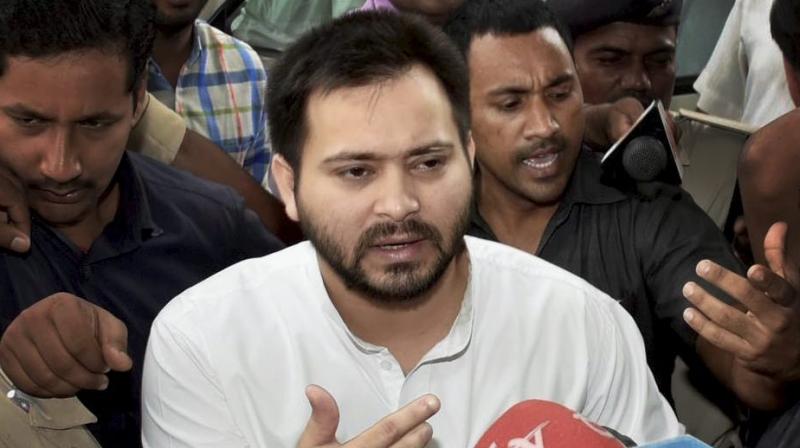 Patna: From a budding cricketer who was once jocularly called a “water boy” by his father and RJD supremo Lalu Prasad Yadav he has emerged as a potent force in Bihar’s political firmament.

Though Tejashwi Yadav didn’t get an opportunity to show his talent on the cricket field, he nearly did as much during his maiden speech as the Leader of the Opposition speaking on the confidence motion put on the floor of the House by chief minister Nitish Kumar.

Political pundits said he has what “it takes to survive in the murky world of politics”. If at all he lacked something, it was the rustic wit and theatrics of his father. But Tejashwi’s punch lines and crisp speeches indicate that the second generation of Yadav is ready to take over the Rashtriya Janata Dal.

The heir apparent of Mr Lalu Yadav nearly decimated Mr Kumar as he went about accusing him of plotting the alliance’s downfall. He said Mr Kumar, by allying with the BJP, has shifted from Hey Ram to Jai Shri Ram and has now become a nationalist. Though Mr Kumar won the motion, it was Tejashwi who won several hearts in the House.

At one point during his speech, the “young turk” shocked one and all by addressing BJP leader Modi as “boss”. “You had 91 MLAs, boss, when Nitish threw you out like a fly in a cup of milk.” He was referring to the year 2013 when the Bihar CM dismissed many NDA ministers, angered at the selection of BJP prime ministerial candidate for 2014 polls. Sitting beside Nitish, Tejashwi used to address him as uncle until the alliance broke up.

Born on November 9, 1989, a year before his father became the Bihar CM, Tejashwi started his career as a cricketer. As a student of DPS R.K. Puram, New Delhi, he became the captain of the school cricket team. Tejashwi did not pass his Class 9, but was selected in the Delhi Daredevils team in 2008. However, he couldn’t get into the playing XI.

For two years, Tejashwi only carried drinks for teammates. Not one to be disappointed, he joined the Jharkhand Ranji team, but left the team once his performance on the field began to dip.

A year before Bihar Assembly polls, he started taking a keen interest in politics. In 2015, he contested from Raghopur constituency and won with a handsome margin. Days later, he took oath as the Bihar’s deputy chief minister.

Tejashwi is active on the social media and keeps updating his activities on Twitter and Facebook. Everyone knows speaking in English is not his cup of tea. He is comfortable speaking and tweeting in Hindi. He is the first politician in the history of Indian politics to have promoted a Hindi film.

While wishing his father on his 70th birthday, he inadvertently called him an “injustice crusader”. On another occasion, when a news channel made a story on his tweet in English on PM Narendra Modi’s recent trip to Europe,  a fuming Tejashwi challenged the media to debate with him in English and got trolled quite badly by Twitterati.

People still fondly remember Tejashwi as a fair and long-haired youngster clad in jeans and accompanying his mother Rabri Devi on election campaigns during the 2005 assembly polls.

Tejashwi’s political fortunes took a nosedive when he got embroiled in a corruption case and the CBI registered an FIR against him for having benami properties worth crores of rupees. BJP deputy CM Sushil Modi came out with a list of benami properties in his name. “Some of them were transferred in his name when he was three years old. By the age of 26, Tejashwi became the owner of 26 properties of which 13 are benami,” alleged Mr Modi.