44 Gujarat Congress MLAs back home ahead of Rajya Sabha polls

In the backdrop of Gujarat Congress MLAs quitting and joining the BJP, as many as 44 of the grand old party MLAs had left for Bengaluru. 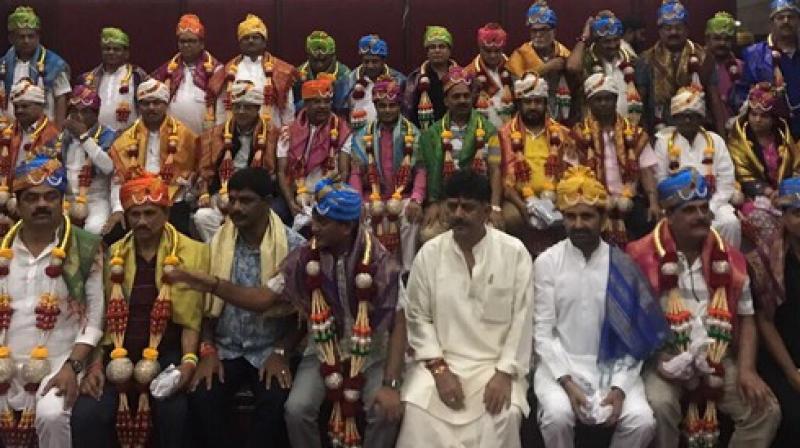 All the MLAs arrived at Kempegowda International Airport in the wee hours of Monday. (Photo: Twitter | ANI)

Bengaluru: The 44 Gujarat Congress MLAs, who were in a hideaway in Bengaluru, returned home on Monday to cast their votes in the upcoming Rajya Sabha polls.

All the MLAs, who were staying at Bengaluru's Eagleton Resort, arrived at Kempegowda International Airport in the wee hours of Monday.

Congress Member of Parliament (MP) DK Suresh on Sunday said that the Gujarat Congress is united and all the 44 Members of Legislative Assembly (MLAs) are ready to vote for Ahmed Patel in the election scheduled for August 8.

"All of them (Gujarat Congress MLAs staying in Bengaluru resort) are happy, tomorrow or day after tomorrow they may leave," said Suresh, adding, "Gujarat Congress is united, MLAs want to vote Ahmed Patel and will get back seat of Congress."

In the backdrop of Gujarat Congress MLAs quitting and joining the BJP, as many as 44 of the grand old party MLAs left for Bengaluru.

Congress MLA Shailesh Parmar earlier said, "To ensure that BJP is not successful in its mission, 44 of us Congress MLAs are leaving from Gujarat for Bengaluru. To hide their failure, the saffron party is trying to make sure our MLAs resign by offering money and through police pressure."

Earlier, Congress leader Abhishek Manu Singhvi had accused the BJP in the state of horse-trading ahead of the Rajya Sabha elections scheduled for August 8.

The developments came after at least six Congress MLAs in Gujarat resigned from the party to join the BJP.