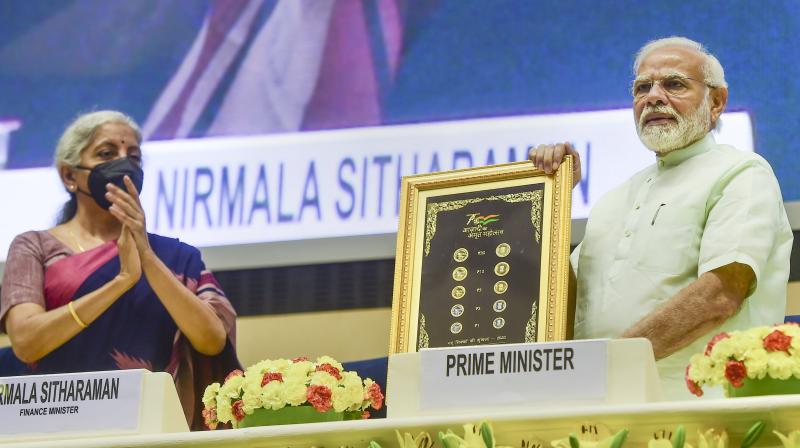 Inaugurating the iconic week celebrations by the ministries of Finance and Corporate Affairs as part of the Azadi ka Amrit Mahotsav, Modi said India has developed various financial inclusion platforms and there is a need to create awareness about them for their optimum utilisation.

There should be an effort to extend these financial inclusion solutions globally, he said.

In his address, the Prime Minister said, “It is necessary to focus on how to make our domestic banks, currency an important part of international supply chain and trade.”

“We have shown in the last 8 years that if India collectively decides to do something, then India becomes a new hope for the world. Today, the world is looking at us not just as a big consumer market but looking at us with hope and confidence as a capable, game-changing, creative, innovative ecosystem,” Modi said.

The Prime Minister also launched the “Jan Samarth portal”, a credit-linked portal of 13 government schemes, to ensure ease in credit availability to youth, entrepreneurs and farmers and a special series of coins that are also “visually impaired friendly”.

The coins of Rs 1, Rs 2, Rs 5, Rs 10 and Rs 20 denominations will have the Azadi Ka Amrit Mahotsav (AKAM) design. These are not commemorative coins and will be part of the circulation.

“This new series of coins will remind people of the goal of Amrit Kal and motivate people to work towards the development of the country,” Mr Modi said while addressing the iconic week celebration.

The Jan Samarth portal will be an “end-to-end delivery platform” and more people will come forward to avail of loans because of its ease of compliance, he said.

Speaking during the event, finance minister Nirmala Sitharaman said each of the 13 government schemes will be displayed on the Jan Samarth portal.

“This portal is going to make it easy so that citizens do not have to ask the same questions every time to avail themselves a government programme,” she said. Modi said the country has borne the brunt of government-centric governance in the past, but now, India is moving ahead with the approach of people-centric governance.

He aid earlier that it was the responsibility of the people to go to the government to avail the benefits of the schemes. Now, the emphasis is on taking governance to the people and freeing them from the rigmarole of doing the rounds of different ministries and websites.

“Launch of National Portal for Credit Linked Government schemes - Jan Samarth Portal is a major step in this direction. This portal will improve the lives of students, farmers, businessmen and MSME entrepreneurs and will help them in realising their dreams,” Mr Modi added.

The Prime Minister emphasised that the youth have been kept at the heart of the reforms the country has undertaken in the last eight years.

“By reducing more than 30,000 compliances, abolishing more than 1,500 laws, and decriminalising several provisions of the Companies Act, we have ensured that Indian companies not only move ahead but also achieve new heights,” he said.

The Prime Minister said the country is seeing the result of simplification in indirect taxes by bringing in Goods and Services Tax (GST).

Now, it has become normal for GST collection to cross `1 lakh crore every month, he said, adding that there has been a constant increase in EPFO registration, while the GeM portal has brought in new ease for government procurement.

The purchase figure for the GeM portal has crossed 1 lakh crore, the Prime Minister informed.

Mr Modi said that currently, India has 70,000 startups and every day a dozen new startups are getting added.

He said people have emotionally got attached to government initiatives like Aatmanirbhar Bharat and Vocal for Local.

More schemes can be onboarded as we go along, Das added.