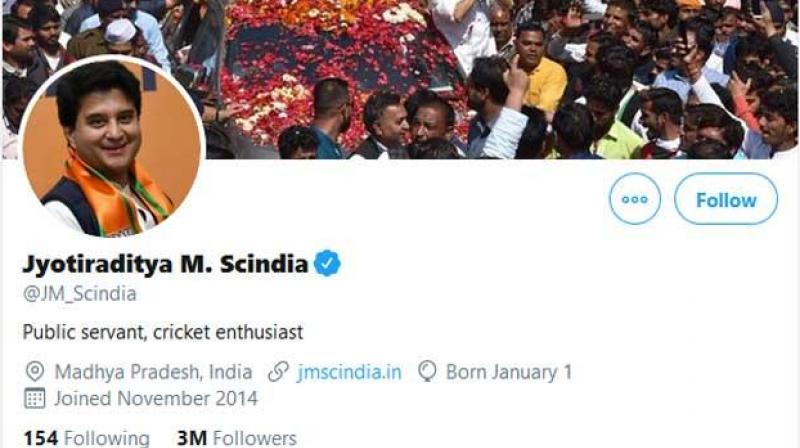 Bhopal: Back in December last year, Jyotiraditya Scindia suddenly pulled any mention of the Congress from his Twitter profile. It kicked up a storm that he was leaving the party. He duly did and joined the BJP in March, in the thick of the coronavirus pandemic. Now Scindia's Twitter profle is missing the BJP.

His twitter bio on Saturday went viral in social media triggering speculations as to if he has deleted ‘BJP’ from his profile, prompting his ‘loyalists’ to issue a clarification denying that he has changed his social media resume deleting BJP in it.

“Mr Scindia had changed his twitter profile before he quit Congress to identify him as ‘cricket enthusiast and public servant’ only. He has changed his profile picture only in the twitter bio after he joined BJP. Hence, there is no question of deleting BJP from his twitter bio”, BJP leader Pankaj Chaturvedy, considered his loyalist, told this newspaper.

The news being circulated in social media claiming that he has changed his twitter bio deleting BJP from it, is “baseless and mischievous”, Mr Chaturvedy added.

Mr Scindia has featured in his latest twitter profile with BJP’s scarf around his neck.

The profile however identified him merely as a public servant and cricket enthusiast.

Mr Scindia who switched over to BJP from Congress in March this year triggering the collapse of the 15-month-old Kamal Nath government, saw the hand of Congress behind the ‘orchestrated row’ over the issue.

“Congress should not worry about me. This is no time to do politics. This is time to provide help to needy people.

I have not joined BJP with any ambition or for any position. My as well as the Scindia family’s goal has always been to serve the people. I am going ahead in the direction along with the entire nation under the strong leadership of prime minister Narendra Modi”, he tweeted.

Congress however took a jibe at him for not identifying him with BJP so far.

“Mr Scindia joined BJP three months ago. But, he is yet to identify him with BJP in his twitter profile”, Congress spokesman here Narendra Saluja said.