The outcome of the by-polls is crucial for Tamil Nadu as it would determine the continuance of the ruling AIADMK in power. 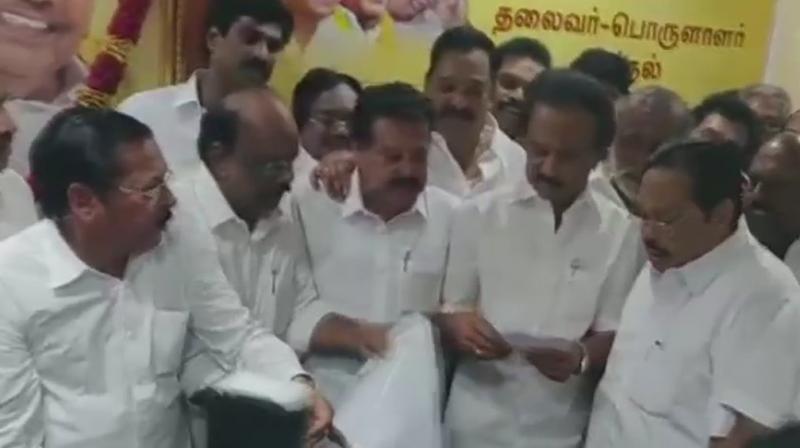 While by-elections to 18 assembly seats were held on April 18 along with the Lok Sabha elections, four others will go to the polls on May 19.

Senior Amma Makkal Munnetra Kazhagam (AMMK) leader Thangatamilselvan exuded confidence that his party would win the by-polls to all 22 Assembly seats in the state, following which the incumbent government "won't have majority."

The counting of votes polled in the by-elections to the 22 seats will take place on May 23.

Thangatamilselvan told reporters here that if the DMK did not support the AMMK in seeking a no-confidence motion, it amounts to the M K Stalin-led party being "afraid of us."

While by-elections to 18 assembly seats were held on April 18 along with the Lok Sabha elections, four others will go to the polls on May 19.

The outcome of the by-polls is crucial for Tamil Nadu as it would determine the continuance of the ruling AIADMK in power.

Claiming that the AMMK would win all 22 seats, the former MLA said that in that case, the ruling AIADMK would be short of majority in the 234-member Tamil Nadu assembly.

Since his party will not have the desired number of MLAs to seek a no-confidence motion against the government, the DMK should support it on this issue, he said indicating that at least 35 legislators' support was required on the matter.

"The DMK has to support us. If they do not, it means they are afraid of us... only if we and DMK join (hands) can this government be sent home," he said.

The AMMK leader, who had fought the April 18 Lok Sabha polls from Theni Parliamentary constituency, said the general elections would be held subsequently and that his party would storm to power.

In the 234-member state assembly with 22 vacancies, the AIADMK has a strength of 113, excluding the Speaker. The simple majority mark in the full House is 117.

The principal opposition DMK along with its allies-- Congress and Indian Union Muslim League (IUML), has 97 MLAs.

Incidentally, two MLAs of AIADMK's alliance parties, designated as its members in the assembly records since they contested on its symbol, have shown signs of stress with the ruling party.

Legislator S Karunaas, leader of Mukkulathor Puli Padai, has been anti-government for some time, while Manithaneya Jananayaga Katchi MLA M Thamimun Ansari, a strident critic of the BJP, backed the DMK-led alliance in the Lok Sabha polls after AIADMK struck a poll pact with the saffron party.