The BJP has opposed the revocation of AFSPA, opposed the return of power projects and formally ruled out any political initiative vis-a-vis Kashmir. 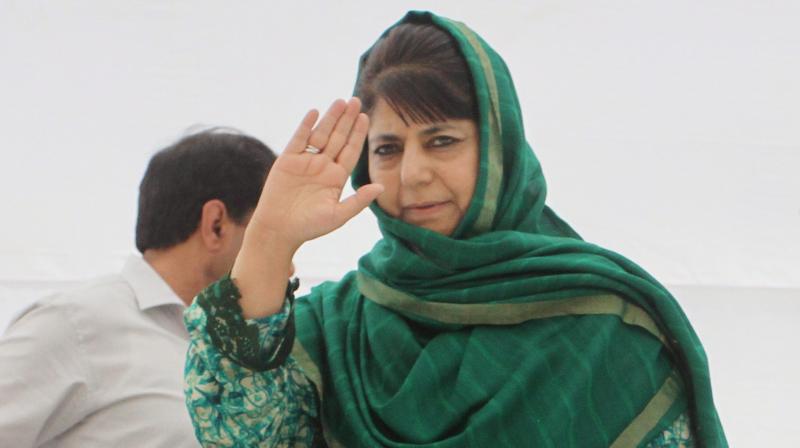 Srinagar: Jammu and Kashmir’s main Opposition party National Conference (NC) termed chief minister Mehbooba Mufti’s assertion that Prime Minister Narendra Modi was the “only hope” to take the state out of the quagmire as her “sycophancy”.

It said that the ruling party has humiliated Kashmiris and asked, “Has she forgotten how Modi insulted her father Mufti Sahib”?  The NC said that the CM’s continued and unconditional loyalty to the BJP and the Prime Minister in light of her declaration that Mr Modi was Kashmir’s “only hope” despite the Central government’s refusal to even acknowledge the political nature of the Kashmir issue her “sycophancy is unbecoming and has denigrated the sanctity of the J&K chief minister’s office”.

Party spokesman Junaid Azim Mattu said in a statement that Ms Mufti’s unilateral declaration of loyalty to the PM vis-a-vis the resolution of the Kashmir issue was astounding as the PM had publicly snubbed and humiliated her father “by curtly telling him that he doesn’t require any advice on Kashmir during a public rally in Srinagar”.

“Either Mehbooba Mufti is suffering from amnesia or she is willing to oversee the humiliation meted out to her late father by the same Prime Minister. We have a PM who refuses to accept the political nature of the Kashmir issue and somehow Mehbooba Mufti sees the same PM as Kashmir’s “only hope”,” the spokesman said.

The NC also said that the chief minister would do well to remember how late Mufti openly declared that Mr Modi was a “toofaan ka aadmi” and expressed similar “unfounded and unrealistic” optimism in his political will to resolve the Kashmir issue.

“What was the outcome of that optimism apart from BJP publicly and officially demolishing every single promise made in the alleged ‘Agenda of the Alliance’? There is not a single promise made in the ‘Agenda of the Alliance’ that BJP has not belittled and ridiculed and despite all of this Mehbooba Mufti shamelessly indulges in this sycophancy which is unbecoming of a CM,” the party spokesman said.

He said that Mufti’s declaration of Modi being Kashmir’s “only hope” was ironic and ridiculous in the backdrop of the Advocate General of India’s statement in the Supreme Court ruling out any possibility of talks with various stakeholders in Kashmir including the separatists. “Did Mehbooba Ji not read that statement made by the Advocate General in the SC? Her allies have openly humiliated her and continue to humiliate her and sadly it seems like she has become insult-proof in order to remain glued to her chair. The BJP has opposed the revocation of AFSPA, opposed the return of power projects and formally ruled out any political initiative vis-a-vis Kashmir. Is this the ‘only hope’ Mehbooba Mufti is talking about?”, Mattu asked.