Those involved in chitfund, mining scams will be put behind bars: Amit Shah in Odisha

Shah, after releasing the party's manifesto said that the BJP seeks to build a 'New Odisha' by breaking the shackles of the ruling govt. 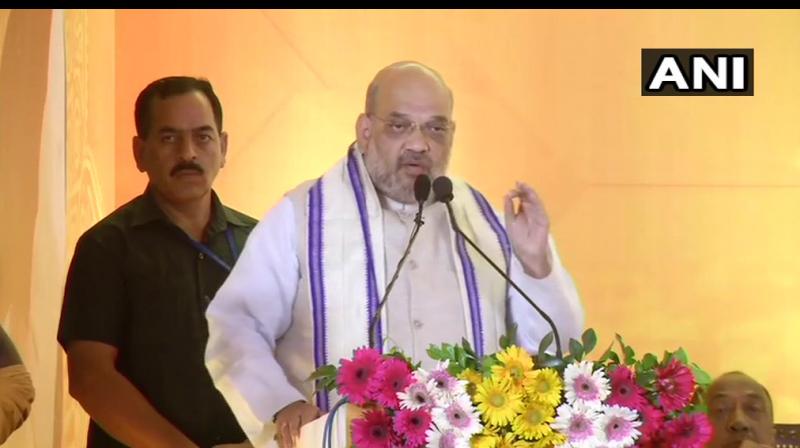 Shah also alleged that the powers of the elected representatives have been handed over to the bureaucrats, sidelining the senior leaders of the ruling BJD. (Photo: Twitter/ ANI)

Odisha: BJP president Amit Shah on Sunday called upon the electorate to give "rest" to Odisha Chief Minister Naveen Patnaik as he is "tired" and "lacks the will" to develop the state.

Shah was addressing a rally here under Aska Lok Sabha segment in Odisha's Ganjam district where polling is slated to be held on April 18.

"There has been no developmental work during Naveen Babu's tenure in 19 years. He is tired. Therefore, give BJP a chance to meet the aspirations of the people," Shah said promising that the BJP will take Odisha on the path of development.

Alleging that the Odisha is being run by the officers, Shah said, "The next BJP government will end 'Babu-dom' in Odisha".

He alleged that officers call the shots in the Naveen Patnaik government while the elected MLAs and MPs have no voice.

The BJP national president also came down heavily on the BJD government alleging that it failed to reach the benefits of welfare schemes, launched by the Narendra Modi govenrment at the Centre, to the people of the state.

"The Modi government in the last five years has allocated Rs 5.56 lakh crore for Odisha's development. Did the money reach the people in their villages?" Shah asked.

Assuring the people that only the saffron party can ensure better governance in the state, the BJP leader appealed to the people not to repeat the mistake of voting the BJD again.

Shah, after releasing the party's manifesto here, said the BJP seeks to build a "New Odisha" by breaking the shackles of the Patnaik-led government, which ruled the state for 19 years.

"While corruption was rampant in the allocation of mines, chit fund scam flourished because of the protection provided to those involved in corrupt practices. A large number of innocent and poor investors were taken for a ride. The BJP, after coming to power, will put them behind bars," he asserted.

Shah also alleged that the powers of the elected representatives have been handed over to the bureaucrats, sidelining the senior leaders of the ruling BJD.

"Bureaucrats are running a show in Odisha, they have no understanding of people's aspirations," he alleged.

Exuding confidence that the BJP will come to power both in Odisha and at the Centre, he said the party manifesto for the state focussed on the welfare and empowerment of farmers, women, youth and the weaker sections of society.

Assembly election in Odisha is slated to be held along with Lok Sabha polls in four phases, beginning April 11. The state has 147 assembly and 21 Lok Sabha seats.