Several Indians living in Europe, while calling to “stop giving platforms to communal figures in Europe”, want Surya to be out as a speaker 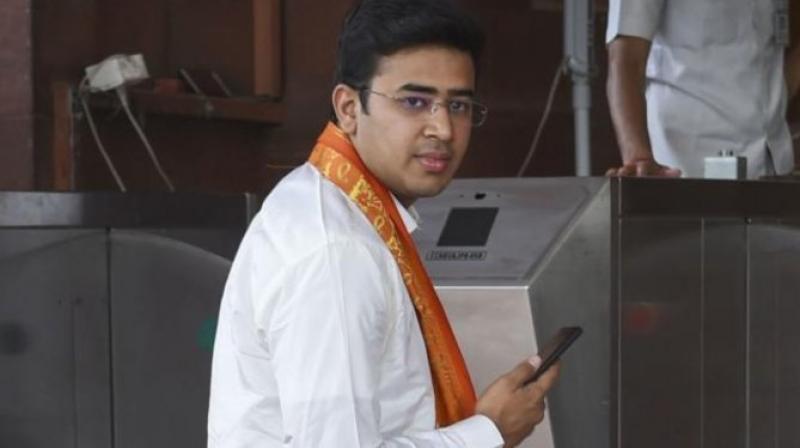 A group of Indians living in Germany have objected to the presence of BJP MP Tejasvi Surya at an event saying he is a “communally divisive speaker” and a “highly polarizing figure.”

New Delhi: A group of Indians living in Germany have objected to the presence of BJP MP Tejasvi Surya at an event -- "India Startup conference 2020” – saying the man is a “communally divisive speaker” and a “highly polarizing figure.” The event, to be held in virtual mode, on October 7 is being organized by Consulate General of India-Hamburg in association with GloMan Consulting GmbH-Hamburg to provide momentum to promote startups and support the economic relations between India and Germany.

Several Indians living in Europe, particularly a group of Indian community in Germany, while calling to “stop giving platforms to communal figures in Europe” want Surya to be out as a speaker. The group under the banner `India Solidarity Germany’ has said that the Consulate General of India has invited a `highly polarising figure’ from Indian politics -- Tejasvi Surya -- to an event that appears to be inclusive in nature for Indians of all faiths.

“On October 7, the Indian Consulate, Hamburg is hosting an event for Startups, which by the looks of it is progressive. But it's disheartening to see its speaker list include Tejasvi Surya, a highly provocative and communal politician from Bangalore, seasoned by the RSS. This person is famous for publicly stating that anyone who is against Modi is an anti-national. It's shameful for a Parliamentarian to even make such statements,” the group said.

“It brings into question the spirit with which the event is conducted whether it is for all Indians or only for those who endorse or are fine with the polarising, abhorrent and dehumanizing views held by Tejasvi Surya, which goes against the diverse community of Indians in Germany. It is extremely concerning to see an official platform is being given for such a controversial figure which will achieve nothing but further division and right-wing radicalisation on the German soil,” the group said in its letter to the Indian Consulate General. They have also started a signature campaign against invitation to Surya asking people to oppose the event.

The group in its letter posted alleged inflammatory tweets by Surya and asked the Indian Consulate if it also endorses his views where he openly plays communal-politics.

“Tejasvi Surya clearly has a divisive agenda against the communities that are not Hindu. This agenda is in contravention of the European ethos of equality, diversity and inclusivity. It is also in contravention of the European responsibility under international Law, most notably, UDHR, ICRD, ICCPR, EU Charter of Fundamental Rights, Directive 2000/78/EC and COM(2008)462. By giving a platform to Mr. Surya, we fear that the EU will be closing the doors of equal opportunity for the non-Hindu communities within and outside of India,” the Indian group said.

It added that by hosting him, the Consulate will be “complicit in promoting the communal ideology of Mr. Surya and would allow Germany to be a host of radicalised Indian diaspora who already marvel in hate speech, oppression of dissent and populism on social media and beyond”.

The group intends to raise its concerns with other European bodies and human rights institutions to limit platforms “to people who are out rightly bigoted, misogynistic and take shelter behind freedom of speech to spew hatred against particular communities.”

“We will really appreciate your actions toward holding and promoting the idea of progressive and pluralistic India by not hosting a polarizing figure. We are hopeful that the Consulate will find several non-controversial political and social leaders who are inclusive, respectful of diversity and strongly believe in democracy and human rights of all within and outside India,” the group said.