'Investigating agency should not discriminate': Special judge on Aircel-Maxis case

The ED is also probing a separate money laundering case in the Aircel-Maxis matter, in which Chidambarams have been questioned by agency. 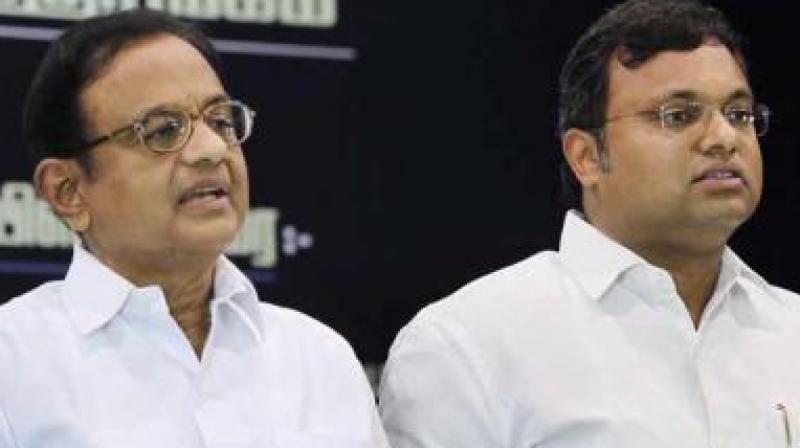 A Delhi court Thursday granted protection from arrest to former finance minister P Chidambaram and his son Karti in Aircel-Maxis cases filed by CBI and the Enforcement Directorate. (Photo: File)

New Delhi: A Delhi court Thursday granted protection from arrest to former finance minister P Chidambaram and his son Karti in Aircel-Maxis cases filed by CBI and the Enforcement Directorate, saying that charges against them were not of grave magnitude as the alleged money laundered is a "paltry amount" of Rs 1.13 crore compared to the money purportedly received by accused already discharged in the cases.

The court, however, directed the Chidambarams to join the probe in the cases lodged by the two agencies and said that in the event of arrest, they be released on a personal bond of Rs 1 lakh and one surety of like amount.

The court also directed that they would not leave the country without its permission and warned them against committing similar crime again and also that they would not contact, threaten or influence any witnesses in the cases or tamper with evidence.

The relief in the Aircel-Maxis cases came hours after the Supreme Court gave Chidambaram a setback by dismissing his appeal against the Delhi High Court's August 20 order rejecting his anticipatory bail plea in the money laundering case registered by the Enforcement Directorate in the INX-Media case.

Before Chidambaram and his son were made accused in the Aircel-Maxis case, a special court on February 2, 2017, had discharged DMK leader and former Telecom Minister Dayanidhi Maran, his brother Kalanithi Maran and others in the cases by the CBI and ED.

Later, both the agencies had filed a supplementary charge sheet naming the Chidambarams in the scam.

On Thursday, while granting the relief to the Chidambarams, Special Judge OP Saini said, "Moreover, the allegations against Chidambarams are also not of grave magnitude as the alleged money laundered is about Rs 1.13 crore which is paltry amount in comparison to allegations against Dayanidhi Maran and others, where the bribe amount was Rs 749 crore, but he (Dayanidhi) was not arrested."

The judge said: "An investigating agency should not discriminate against the two similarly situated accused, as this was against the rule of law. It may be noted that unwarranted discrimination in the treatment given to different accused in the same case violates the basic norm of the Constitution that the state instrumentalities should always operate in a just, fair and reasonable manner."

Further, the court said both are members of the Parliament. "Chidambaram is a member of the Rajya Sabha while Karti a member of Lok Sabha... Considering these factors, there was no apparent possibility of the accused fleeing from justice. Prosecution has also not cited any appreciable reason for such apprehension.”

It added that there was no possibility for the Chidambarams to commit similar crime as "they don't hold official position in government at present".

Even if further investigation was going on, there was no possibility of the accused tampering with the evidence and if there was any such possibility, the same can be taken care of by imposing appropriate conditions, the judge said.

The court also pulled up the CBI and ED saying both the agencies, instead of arguing the matter, were seeking date after date since the filing of the complaint on pretext of further investigation.

It also said that the probe in the Aircel-Maxis cases have been highly belated by both the agencies as almost entire material was in their possession since beginning.

"The matter is listed for cognisance but the probe agencies instead of arguing are seeking date after date since filing of complaint on the pretext that further investigation is still going on.

"This conduct of the agencies speak for itself and needs no elaboration. The investigation was even otherwise highly belated as almost entire material was in possession of the investigating agencies since the very beginning," the judge said.

The cases relate to alleged irregularities in grant of Foreign Investment Promotion Board (FIPB) approval in the Rs 3,500-crore Aircel-Maxis deal when Chidambaram was finance minister.

The CBI is probing how Chidambaram, 73, when finance minister in 2006, granted FIPB approval to a foreign firm, when only the Cabinet Committee on Economic Affairs (CCEA) was empowered to do it.

The ED is also probing a separate money laundering case in the Aircel-Maxis matter, in which the Chidambarams have been questioned by the agency.