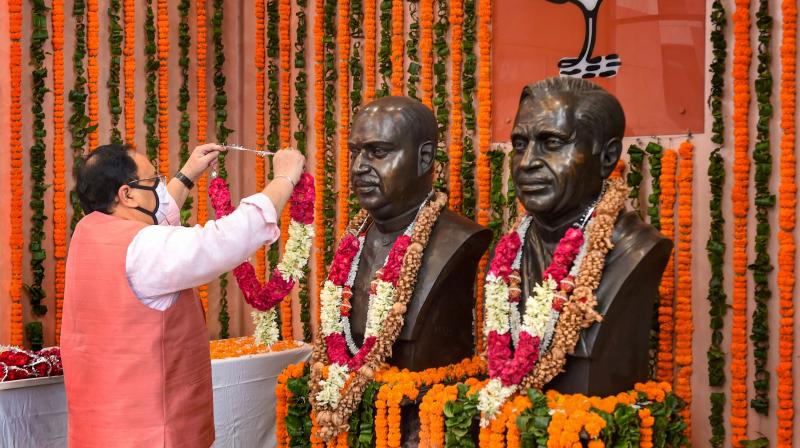 With less than a year left for the Assembly Election in West Bengal, BJP president J P Nadda on Monday called for the use of "lock, stock and barrel" to oust chief minister Mamata Banerjee's party: Trinamul Congress from power in the state. Tearing into TMC leaders over corruption through "cut-money," he also tasked the BJP ran and file to "cut their size."

On the occasion of Jan Sangh founder Dr Syama Prasad Mookerjee's 119th birth anniversary, Mr Nadda told a BJP virtual rally, "Now is the time to restore the pride of Bengal following the path of Syama Prasad Mookerjee. It has to be brought back and taken to a height from a political and educational perspective. For this, the present government, which has been inflicting all types of losses, has to be thrown out lock, stock and barrel to establish the BJP rule."

He said, "It is our task which we have to fulfill. The politics of violence and criminalisation have become the order of the day in the birthplace of Mookerjee. We never heard the word: cut money which we hear now. Cut the size of these leaders in coming times. Their size has to be cut."

Setting the BJP's agenda, Mr Nadda alleged, "Education has taken a nosedive in West Bengal. It has gone down to the bottom. Politicisation is taking place. The situation here has become such that you would get a scope of education based on the party you have voted for. The politicisation has been to such a lower level that everything has been politicised. It is bad and sad for Bengal. It should be our resolve to restore the past glory in education which Syama Prasad Mookerjee achieved by serving as the vice chancellor of the Calcutta University at a young age of 33."

He further asked the BJP to work for "decriminalization" of politics. Mr Nadda claimed, "There is nothing left in West Bengal except vying for posts. They are ready to compromise on all fronts only to remain in power. Criminalisation has grown so much now that it has posed a question of crisis for Bengal. We have to give the answer. We have to fight this battle. Bengal was once known for its conscience. But conscience ends where force is used."

According to him, "The present government is throttling the conscience in Bengal. Political opponents are slapped with cases even of narcotics and put in jail. Our MPs are not allowed to work in corona crisis. They are put under house arrest with notices pasted outside. What is the yardstick? While Syama Prasad Mookerjee spoke about national integrity from regional aspirations, the present Bengal CM does not think it fit to report the corona cases to Delhi. Which type of federalism are we working in? At a time when our PM believes in cooperative federalism and takes all on board to fight corona together,  the cm is otherwise here."

The BJP chief noted, "Aayushmaan Bharat is for the health of the poor. But it is not implemented in Bengal because it's from the centre and Modiji. Such a decision neither serves regional aspirations nor national interest."