Will waive farmers' loan if voted to power in MP: Rahul Gandhi

Rahul addressed a rally in Mandsaur to observe 1st anniversary of police firing on farmers during a protest in which 6 farmers were killed. 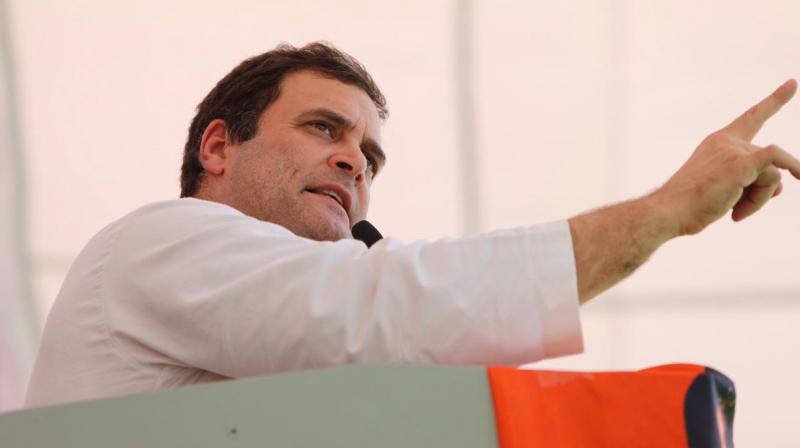 Mandsaur: Congress president Rahul Gandhi on Monday assured the farmers of Madhya Pradesh that their loan would be waived within 10 days if his party comes to power in the state.

"Here Kamal Nath (MP Congress President) and Jyotiraditya Scindia (the state poll campaign committee chairman) are sitting. I want to assure you that within 10-days of coming to power in Madhya Pradesh, the government will waive (farmers') loan," Rahul Gandhi said.

Rahul was addressing a rally at Pipliya Mandi in Mandsaur district to commemorate the first anniversary of police firing on farmers during an agitation in which six farmers were killed.

Congress president also promised the farmers that his party would ensure justice to the victims of Mandsaur firing and would take action against those responsible for the police firing on farmers if it comes to power.

Taking a jibe at Prime Minister Narendra Modi over the issue of farmer’s loan waiver, the Congress chief said, “PM Modi waived off loan worth Rs 1.5 lakh crore of just 15 businessmen, but I requested him to waive off farm loans, his answer was SILENCE.”

“Modiji does not have a word for the voice of farmers,” he added.

He further said, “When I asked the same to Captain Amarinder Singh and Siddaramaiah, in just 10 days Karnataka and Punjab governments waived off farm loans.”

Criticising the BJP government in Madhya Pradesh over Mandsaur firing in which five farmers were killed, Rahul said, “A year ago, Madhya Pradesh government shot and killed farmers. Today, all across India, farmers are demanding for their rights,” while adding that “the truth is PM Modi and BJP are not concerned about farmers. Helping their rich businessmen friends is their only priority.”

“The government only gives to the rich and takes away from the power. Prime Minister Modi calls Mehul Choksi Mehul bhai and Nirav Modi, Nirav bhai,” he said.

Rahul further added, “Narendra Modi ji gave Rs 30,000 crore to ‘Nirav bhai’ and ‘Mehul bhai’. With this much amount, the loan of the state’s farmers would have been waived twice.”

Accusing PM Modi of betraying the farmers, Congress chief said, “The food we eat is all due to the efforts of our farmers and their families, not rich businessmen. Which is why farmers are our priority.”

Madhya Pradesh is all set to go to Assembly polls in November along with Rajasthan and Chhattisgarh.