The visit came on a day when Shiv Sena, in an editorial in Saamna, asserted that it will fight all upcoming elections solo. 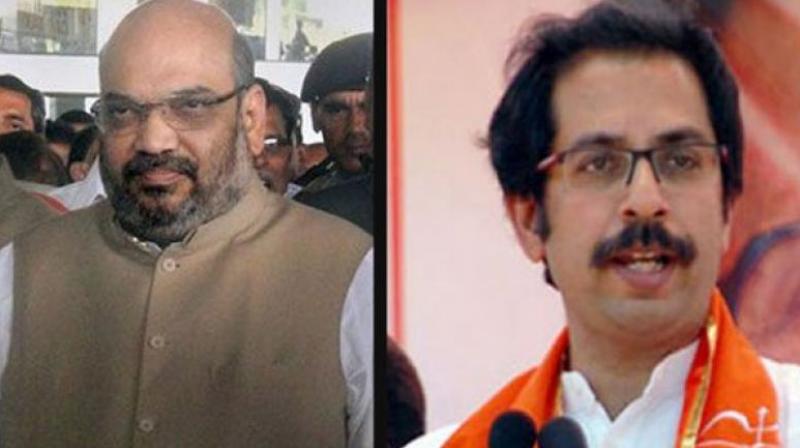 This is the first meeting at Uddhav Thackrey's residence, Matoshree, after Amit Shah's visit in 2017 when he came to seek support for NDA’s presidential nominee. (Photo: File)

Mumbai: As part of an effort to reach out to NDA allies, BJP president Amit Shah on Wednesday met Shiv Sena chief Uddhav Thackeray in Mumbai – a visit that is being seen as an attempt by the saffron party to pacify its oldest ally that now calls itself BJP’s “biggest political enemy”.

The visit came on a day when the Shiv Sena, in an editorial in the party’s mouthpiece Saamna, questioned the BJP's outreach programme after suffering defeats in bypolls and asserted that it will fight all upcoming elections solo.

The ties between the two parties have been worsening with every passing day.

Shiv Sena contested a recent bypoll in Maharashtra against the BJP. The Palghar seat was retained by the BJP, though by a narrow margin of 30,000 votes.

The election was part of 11 assembly and 4 parliamentary seats that saw the BJP winning just two. In March, BJP lost two important seats in Uttar Pradesh, the state that elects as many as 80 members of parliament.

A worried Amit Shah quickly lined up a series of visits to its allies to ensure that the relations remain intact ahead of the 2019 Lok Sabha polls. The move is also significant at a time when the opposition is making a concerted effort to come together to ensure that the Narendra Modi-led government do not get a second chance to come to power.

Shah on Thursday will travel to Chandigarh to meet Shiromani Akali Dal's Parkash Singh Badal and Sukhbir Singh Badal as part of the BJP’s ‘Sampark for Samarthan’ or outreach programme.

The chain of meetings are being seen as an attempt by the BJP to reach out to its allies who have either been criticising or expressing their dissent with the party and it also aims to strengthen the National Democratic Alliance ahead of general polls.