Chouhan held a lantern protest rally over the issue of electricity shortage in MP. 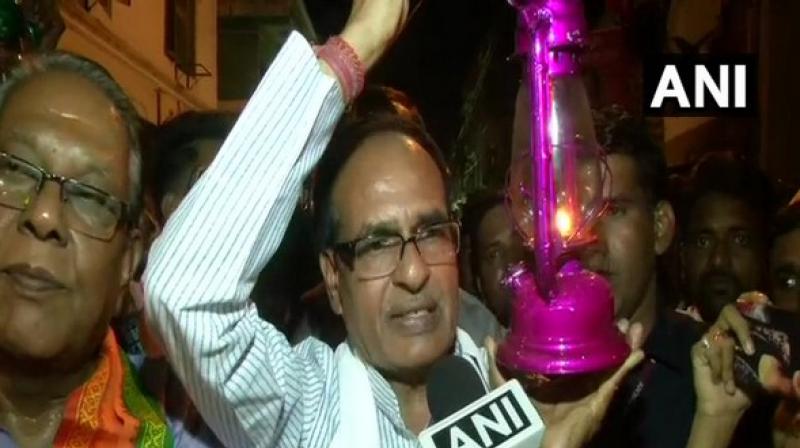 'Digvijaya Singh had turned Madhya Pradesh into a state of darkness and that era is coming back,' Chouhan said. (Photo: ANI)

Bhopal: Former Madhya Pradesh CM and BJP leader Shivraj Singh Chouhan on Sunday held a 'lantern march' in Bhopal along with other party leaders and supporters.

Chouhan held a rally to target the ruling Kamal Nath government and Congress leader Digvijaya Singh over the issue of shortage of electricity in the state.

"Ever since Congress has come, electricity has become a major issue. Digvijaya Singh had turned Madhya Pradesh into a state of darkness and that era is coming back. 'Lalten' is the symbol of the era of darkness, that is why we are doing this march to raise awareness among the public," Chouhan said while speaking to ANI.

On Saturday, Chouhan had accused Congress of blatantly lying on farm loan waiver in the state stating that both Congress president Rahul Gandhi and Madhya Pradesh Chief Minister Kamal Nath have given contradictory statements on loan-waiver to farmers.

"Both Congress president Rahul Gandhi and Chief Minister Kamal Nath gave contradictory statements on farm loan waiver. While the former is saying that the loans of farmers were waived within two hours of forming a Congress government in the state, the latter has sent messages to lakhs of farmers on their mobiles stating that though the application for waiving loans have been received it cannot be granted as Model Code of Conduct (MCC) for the Lok Sabha elections is in place," Chouhan had said.