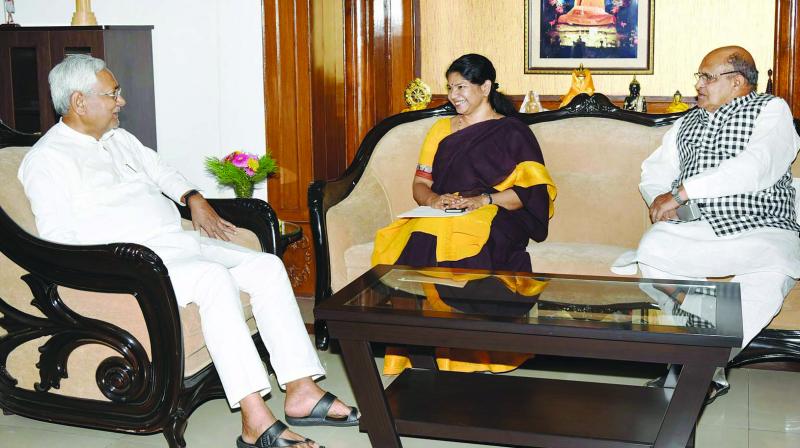 New Delhi: Former West Bengal governor Gopal Krishna Gandhi is emerging as a possible Opposition candidate for the presidential elections even as the campaign for Opposition unity spread down South. DMK veteran Karunanidhi’s birthday celebrations in Chennai on June 3 is turning out to be the next big event for an anti-BJP platform for these parties.

The parties had earlier come together on May 1 to mark socialist leader Madhu Limaye’s birth anniversary. The event had been attended by leaders across the socialist spectrum as well as the Congress and Left parties.

Mr Gandhi, who is the grandson of Mahatma Gandhi, was the West Bengal governor from 2004-2008.

Trinamul Congress chief Mamata Banerjee had proposed his name as the candidate for the vice-president’s post in 2012. The former IAS officer had written an open letter to Mr Modi after he became the Prime Minister in 2014.

Sources, however, added that the name has not been finalised yet and a decision would be taken by the third week of this month. The other names doing rounds are of NCP chief Sharad Pawar and senior JD-U leader Sharad Yadav.

The parties which hold the key to the presidential polls include AIADMK, BJD, TRS, YSRCP, AAP and INLD. These parties maintain equidistance from BJP as well as Congress in their domestic state-level political considerations. Out of these BJD is currently miffed with the BJP after suffering losses in the recent civic polls in Odisha while the AIADMK is in the midst of merger talks. CPI-M General Secretary Sitaram Yechury met Mr Patnaik on Thursday.

Sources said Ms Kanimozhi discussed about the current political situation in the country with the two leaders. Both Mr Kumar and Mr Yadav have accepted the invitation and will attend the even in Chennai.

All eyes would be on Ms Kanimozhi when she reached Delhi on Saturday to meet other top political leaders and invite them for her father’s birthday. Speculation is rife that this could also be a move to tap the Opposition leaders for a anti-BJP front during the 2019 general elections and hold parleys on the presidential elections.