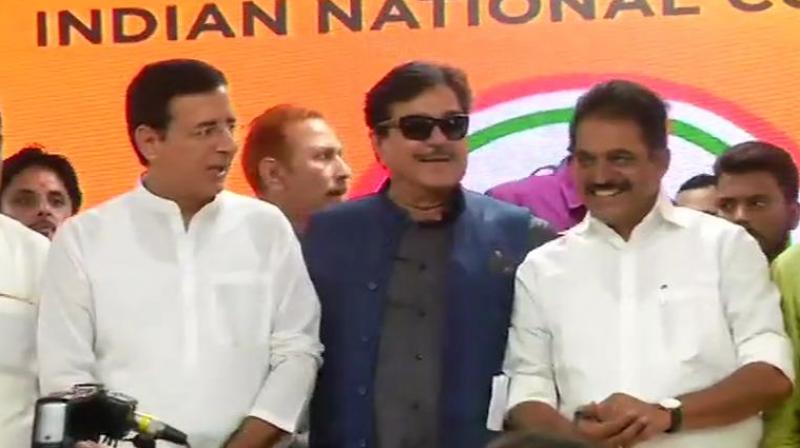 New Delhi: Actor-politician Shatrughan Sinha joined the Congress on the foundation day of the BJP Saturday, saying he has quit the party as it has turned into a "one-man show and two-men army". Congress General Secretary K C Venugopal welcomed Sinha into the party fold and termed him the "best politician who was earlier with the wrong party".

Joining the Congress, Sinha said its president Rahul Gandhi is a "tried, tested and successful dynamic leader, who is the face of the nation and its future". He hit out at the BJP leadership, alleging there's no place left for dialogue in the BJP anymore and the party's top brass "doesn't value its own people and views opponents as their enemies". Party veterans are not being looked after in the BJP and are being sent to 'Margdarshak Mandal', he alleged. "In the BJP, democracy has slowly and surely turned into dictatorship. The party has become a one-man show and a two-men army," Sinha alleged.

In an apparent reference to Prime Minister Narendra Modi, he said, "People have called your bluff and understood your hollow promises. You have been exposed." The 72-year-old leader said whenever he tried to make a point, he was called a traitor. "If speaking the truth is rebellion, then I am a rebel," he added. He also said the country would have transformed if the money spent by the BJP's on its publicity campaigns was spent on development.

Lauding the Congress' proposed NYAY scheme, he said such a proposal has never been unveiled in the country. Sinha represents Bihar's Patna Sahib seat in the Lok Sabha. He is all set to take on the BJP's Ravi Shankar Prasad in the constituency. Congress spokesperson Randeep Surjewala, AICC in-charge for party's Bihar unit Shaktisinh Gohil welcomed Sinha into the party.