Congress like sinking Titanic ship, worse than in 2014: Modi in Maha's Nanded

He said the Congress has more factions in Maharashtra than the number of MLAs it has in the state. 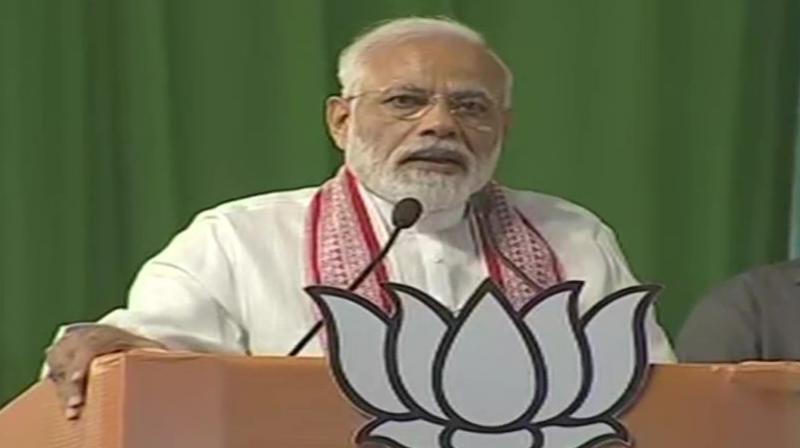 The prime minister accused the Congress of wanting to hold talks with separatists 'who take money from Pakistan'. (Image: ANI twitter)

Nanded: Prime Minister Narendra Modi Saturday dismissed electoral challenge from the Congress party, describing it to be "like a Titanic ship which is sinking", while also slamming it for promising to scrap the sedition law.

Addressing a poll rally here in support of BJP candidates from Nanded, Latur, Hingoli and Parbhani in central Maharashtra, Modi also said that Congress president Rahul Gandhi has opted for a second seat where the "majority community is in a minority". With an apparent reference to the Congress' manifesto promise of ensuring a minimum income guarantee to the poor, the prime minister said the opposition party plans to burden the middle class with more taxes to fund the scheme. It offers the middle class, which is the backbone of the country, nothing, Modi claimed.

Whenever the Congress is in trouble, it makes false promises and then becomes "Gajini" (the character, played by Aamir Khan, which suffers from memory loss), Modi said. "The Congress is like a Titanic ship which is sinking," Modi said, adding the party was reduced to just 44 seats in 2014 and it stares at a worse situation this time around.

He said the Congress has more factions in Maharashtra than the number of MLAs it has in the state. "The Congress' promise of scrapping the sedition law is like giving an open licence to the 'tukde-tukde gang' (those who want disintegration of India)," Modi said. He sad the the Congress' "naamdar" (dynast, referring to party chief Rahul Gandhi) had to use a microscope to look for a second "safe" seat.

In the constituency he has chosen, "the majority community is in minority. He has also said he will not speak against his main Left rival," Modi said. Earlier, at a rally at Wardha on April 1, Modi had said that Congress leaders were afraid of contesting from "constituencies dominated by majority population (Hindus)".

Gandhi is contesting from Amethi in Uttar Pradesh as well as Wayanad in Kerala. Referring to pictures of Gandhi's roadshow in Wayanad, Modi quipped, "One had to find Congress flags in the Congress president's roadshow." "Will Amethi tolerate this insult?" he asked. "Congress (sitting) MP in Hingoli (Rajiv Satav), (NCP chief) Sharad Pawar and his commander Praful Patel have run away from the electoral field," Modi said.

All three leaders are not contesting the elections. The Congress was responsible for the problems in Jammu and Kashmir, and those of terrorism and Naxalism, Modi alleged.

The prime minister accused the Congress of wanting to hold talks with separatists "who take money from Pakistan". "The Congress and its allies want two prime ministers -- one in Delhi and another in Jammu and Kashmir", Modi said, referring to a demand made by National Conference leaders Omar Abdullah.