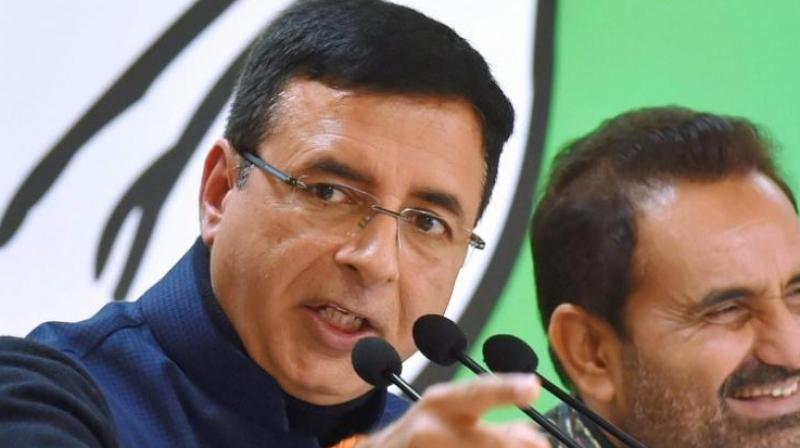 The Congress had said on Friday that the ED charge sheet filed in the Agusta case before a Delhi court was a "cheap election stunt" to divert people's attention from the "imminent defeat" of the Modi government in the polls. (Photo: PTI)

New Delhi: The Congress on Saturday hit back at Arun Jaitley for making allegations in the AgustaWestland VVIP choppers case, saying the Finance Minister is showing immense faith in "diary entries" to level "bogus" charges, even as the BJP is "mute" on Sahara and Yeddy diaries.

Jaitley had said the Congress should answer as to who were referred to as "RG", "AP" and "FAM" in documents cited by the ED in the AgustaWestland VVIP choppers case and added that Swiss police had also seized papers carrying similar initials in its raids in connection with the case in 2013.

Hitting back, Congress's chief spokesperson Randeep Surjewala tweeted: "Suddenly, FM shows immense faith in 'Diary entries' to make Bogus Allegations! What's good for the goose is good for the gander!" "Why is PM Modi & BJP silent on Sahara Diaries? Why is PM Modi & BJP mute on Yeddy Diaries? Duplicity & Doublespeak is ingrained in BJP's DNA," he said. The purported Sahara diaries, which listed alleged pay-offs to politicians, were recovered following raids conducted in November 2014. The 'Yeddy diaries' refer to former Karnataka chief minister B S Yeddyurappa's purported diary which the Congress claimed had details of "bribes" paid to BJP leaders. The BJP had dismissed all such allegations.

The Congress had said on Friday that the ED charge sheet filed in the Agusta case before a Delhi court was a "cheap election stunt" to divert people's attention from the "imminent defeat" of the Modi government in the polls. Claiming that oral evidence corroborates what was found in the diaries, Jaitley had said the probe agencies began investigation in 2013 when the Congress-led UPA was in power.

According to the ED charge sheet, Michel is understood to have identified the initials "AP" as Ahmed Patel, the senior Congress leader close to the Gandhi family. However, Michel has filed an application in a Delhi court on Friday claiming he has not named anybody in connection with the deal.

Patel on Friday hit out at the government over the Enforcement Directorate charge sheet, saying "baseless and laughable" allegations and "jumlas" are raining this election season. The ED had told the court on Thursday that Michel and other accused received 42 million euros as kickbacks in the defence deal.