At behest of BJP: Mamata targets EC on transfer of police officers

Ms Banerjee wrote, 'I strongly feel that the ECI plays a neutral role to save the democracy in India'. 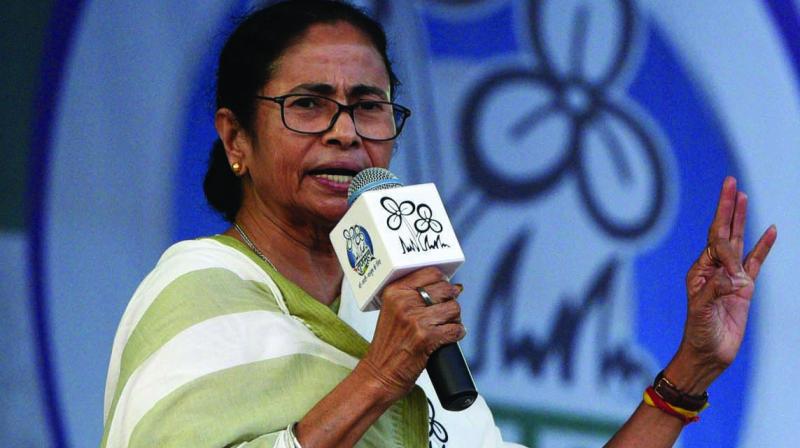 The Trinamul chief noted, "Just soon thereafter the order of the Commission on removal of officers was received. (Image:File)

Shooting off a strong protest letter to the ECI on Saturday Ms Banerjee described its move as "undemocratic and biased" to appease the BJP. The West Bengal chief minister also pointed out that ECI's transfer order of the four IPS officer was followed by Prime Minister Narendra Modi's observation of poor law and order situation in the state. She appealed the ECI to review its decision.

Ms Banerjee wrote, "I strongly feel that the ECI plays a neutral role to save the democracy in India. But, it is very unfortunate that I have to write this letter today to raise strong protest against the transfer order dated 5th April, 2019 issued by the Election Commission of India by way of removing four senior officers from their existing positions. The decision of the Commission is highly arbitrary, motivated and biased."

She alleged, "We have every reason to believe that the decision of the Commission is at the behest of the ruling party at the centre, ie the BJP. Few days back, it was in the press statements of the BJP leaders making comments that senior officers of the state in the police administration would soon be replaced by the ECI. Only yesterday, the Prime Minister and BJP contesting candidate in the coming Lok Sabha Election, made a statement in a TV show that law and order situation is bad in Bengal and that is why 7-phase election has been ordered."

The Trinamul chief noted, "Just soon thereafter the order of the Commission on removal of officers was received. This flow of events gives rise to strong doubts whether the Commission is functioning as per its Constitutional mandate of conducting free and fair elections or working in a manner to appease the ruling BJP at the Centre. Kolkata, Bidhannagar are highly cosmopolitan areas inhabited by people of different caste, creed and communities."

She claimed, "The present officers who are bright and experienced in the area have been playing key roles in seizure of illegal currency, gold, liquor and other prohibited items and enforcing law and order in strict manner resulting in large number of arrests. The decision of the ECI to remove these officers leaves a big question mark whether this step is to give a shield to the vested interested parties and their political masters."

The chief minister added, "Two Officers named by ECI as Commissioners were given the duty of Police Observers in other states. These Officers do not have adequate knowledge of the area and the people. Putting them in charge of these crucial areas can significantly jeopardise managing these areas effectively. Should there be any deterioration in the law and order situation of the state, would the Commission take responsibility?"

She said, "Law and Order is a state subject. yet, no consultation has been made with the state government. The practice of seeking a panel of names of officers has not been followed. Such a step could have given the State Government an opportunity to send a panel of officers who have desired experience over the area that could have helped them to discharge their functions effectively."

Ms Banerjee complained, "By not following the established practice and not seeking a panel of officers from the State Government the action of the ECI is prima facie undemocratic, biased and suffers from principles of natural justice. I would, therefore, urge the Commission to review its decision and would also request the Commission to cause an inquiry as to how and under whose guidance, the decision of transfers of the officers has been taken."