Banerjee also announced that her next agitation will be held in New Delhi on February 13 and 14. 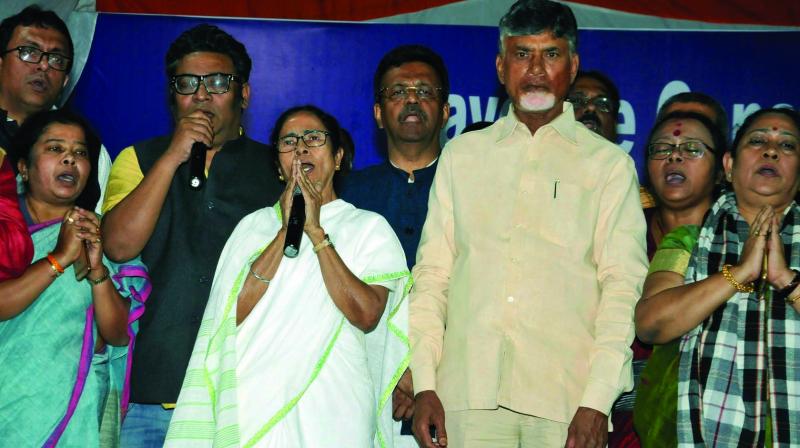 Kolkata: Within three days of launching her “Save the Constitution” sit-in dharna against the Narendra Modi government in Kolkata, West Bengal chief minister and Trinamul Congress supremo Mamata Banerjee hastily packed up her “apolitical” agitation hours after the Supreme Court directed Kolkata police commissioner Rajeev Kumar to face questioning by the Central Bureau of Investigation in the multi-crore Saradha chit fund scam with a rider that the top IPS officer cannot be arrested by the investigative agency. Ms Banerjee also announced that her next agitation will be held in New Delhi on February 13 and 14.

Spearheading the stir over the CBI’s failed attempt to grill Mr Kumar at his Loudon Street residence in South Kolkata on Sunday evening, Ms Banerjee had hit the streets. On Monday, the chief minister had even extended her dharna till February 8, despite the fact that she would be preoccupied from February 6 with supervising preparations for the February 7-8 Bengal Global Business Summit, where she has invited top industrialists and foreign dignitaries to attract investment to the state.

A huge drama unfolded on Tuesday afternoon when Andhra Pradesh CM N. Chandrababu Naidu met her at the agitation venue — Metro Channel in Esplanade — and extended his solidarity to his movement. Sharing the dais with her, Mr Naidu showered lavish praise on Ms Banerjee for organising the sit-in against the BJP-led NDA government at the Centre and putting up a brave fight.

Mr Naidu also tore into the Modi government, alleging autocracy and corruption. The TDP chief later joined a discussion with Ms Banerjee and RJD leader Tejashwi Yadav, who has been camping in the city since Monday evening to extend support, about the movement’s roadmap at a closed-door meeting near the venue. Standing beside Mr Naidu, Mr Yadav and her Cabinet colleagues after this meeting, Ms Banerjee then called off her stir. She announced that the decision was taken after consulting leaders of the 23 parties opposing the Modi government.

“It was an apolitical movement which was launched to protect the Constitution and democracy. When Naiduji and Tejashwi came, we consulted both and all other leaders. Even former Prime Minister H.D. Deve Gowda spoke to me in the morning. All of them said that this dharna is a victory for the people, the country, the Constitution and democracy. So let us end it today. Already the court has given a very positive judgment. But we will continue. We will take our programme to New Delhi next week. On February 13 and 14 a programme will be held there,” she told the crowd.

The Trinamul chief then elaborated: “The court has already ordered that no coercive action, including arrest, can be taken. It said what we were agreed to earlier — that they (CBI) may talk at a neutral place. We will abide by that. Our police has already initiated to give a response to the SC ruling.” Endorsing her stand, Mr Naidu said: “She is playing a leading role against the BJP. We will take our movement to a logical conclusion. Our aim is to oust Mr Modi from power at the Centre. Our democratic institutions are in danger. They (BJP) are misusing the CBI, the Enforcement Directorate, the icome-tax (department), the RBI and the CSSO. There is no party left which has been spared by this government. According to them, only two persons are clean — Mr Modi and Amit Shah.”