The rise and the rise of VK Sasikala

Chinnamma to face first test of her popularity in the bypolls for Jaya’s seat. 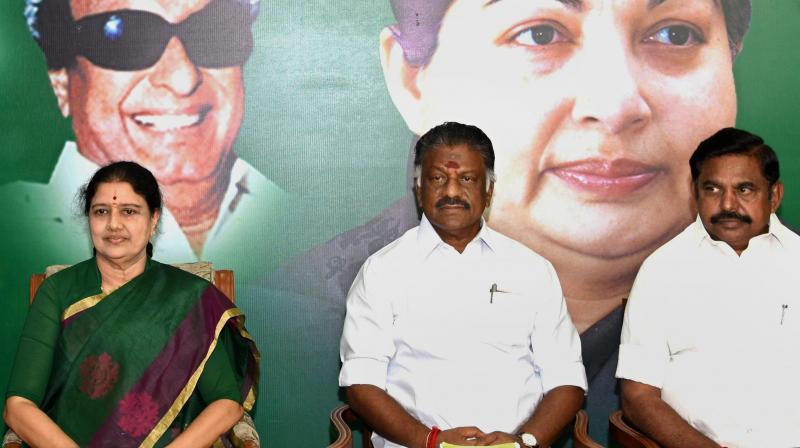 Chennai: From being just a confidante of late J. Jayalalithaa for more than three decades, V.K. Sasikala has now stepped forward to claim the of mantle of chief minister two months after her “elder sister” passed away on December 5.

More than a month after being unanimously appointed to the all-powerful post of general secretary in the AIADMK, Ms Sasikala’s election as the leader of the legislature party was once again a smooth affair with outgoing chief minister O. Panneerselvam himself proposing her name.

After getting the unanimous support of the general council members and MLAs, Ms Sasikala now faces the crucial test of gaining people’s acceptance as she has to get elected to the Assembly within six months of being sworn-in as chief minister. She will face the first test of her popularity in the byelections to the R.K. Nagar seat rendered vacant by Jayalalithaa’s death last December.

The impending local body elections will be another crucial test for her leadership.

Ms Sasikala does not have any links with the film industry like her predecessors, most importantly M.G. Ramachandran and Jayalalithaa, but films in a way had contributed to her proximity to late Jayalalithaa as their friendship began through the video cassette shop she was running in the ’80s.

Born in 1957 in Mannargudi in Thanjavur district, Ms Sasikala hails from a lower middle class family, which was living in a three-room residence at the Municipal Colony, but their economic condition got better after her brother Vinodhagan established himself as a doctor. Moving to Chennai after her marriage to M. Natarajan, a government PRO then, she chose the business of video renting, besides buying a video camera to film weddings in her locality.

When Ms Jayalalithaa visited Cuddalore to attend a party conference in 1984, Sasikala offered to videograph the campaign. Slowly, she entered the good books of the AIADMK leader and gained entry to Poes Garden. Over a period of time, Sasikala became the most trusted companion of late Jayalalithaa and stood by her in good times as well as bad.

Many a time, the departed leader had described Ms Sasikala as her “udanpirava sagothari” (sister born with her) who filled the void caused by the loss of her mother Sandhya.

It was in the late 1980s that Ms Sasikala moved into the sprawling Poes Garden residence of late Jayalalithaa and has been living there since then, through she was expelled from the house and from the party twice – in 1996 and 2011. However, Mrs Sasikala was back at the Poes Garden in March 2012 after she publicly distanced herself from her family members.

She was staying with Jayalalithaa till her death and performed the last rites for her friend, along with Deepak, son of Jayalalithaa’s brother. Even when Jayalalithaa was alive, Sasikala had a major role in party affairs, influencing the choice of state and district level functionaries. She also had a key role in preparing the list of AIADMK candidates for Assembly and Parliament elections, besides the appointment and dismissal of ministers.

Although she had accompanied Jayalalithaa in almost all of her tours and public functions, Sasikala never addressed a single meeting. So far the AIADMK was successfully carrying all its populist schemes under the brand name of its charismatic leader Jayalalithaa. Now, Sasikala has the arduous task of keeping the government’s popularity intact, besides establishing herself as a leader acceptable to the masses.

The first term of Jayalalithaa from 1991 witnessed numerous corruption charges and the AIADMK was routed in the 1996 Assembly polls. Along with late Jayalalithaa, Sasikala faced the colour TV and TANSI land deal case. She is also a co-accused in a disproportionate wealth case which is pending in Supreme Court.