Adityanath claimed that the God’s own country, as Kerala is often called, has been witnessing political violence sponsored by the ruling party. 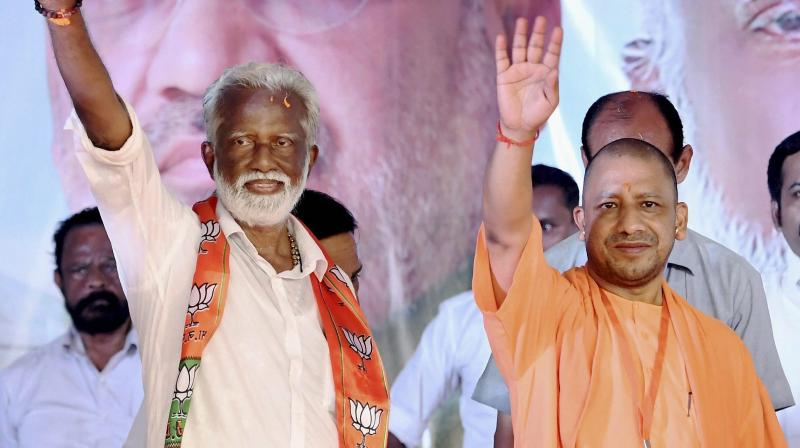 “Love jihad is not a hype, but real in Kerala as well as in the neighbouring Karnataka,” he told reporters on the sidelines of Janaraksha Yatra at Keecheri near Kallyassery here on Wednesday. The NIA findings had confirmed Love Jihad incidents in the state, he said.

“Love jihad is a dangerous trend. The Kerala government has not taken effective steps to check it. The Supreme Court has already passed an order on it and the NIA is investigating it,” he added.

The BJP fielded Yogi as part of its campaign against the killing of saffron activists allegedly by the ruling CPI-M in Kerala, where the firebrand Hindutva leader also accused the Left party of promoting “jihadi terrorism”

Mounting a blistering attack on the Left, he said it was its nature to “grab power at gunpoint”.

Leading the “Jan Raksha Yatra”, a day after BJP president Amit Shah launched the party’s 15-day campaign for “people’s protection”, Adityanath said Kerala occupied an important place in the Sanatan Hindu tradition, and wondered how the “foreign ideology” of Communism entered the state.

“The CPI(M) raises slogans about secularism but promotes jihadi terrorism. Kerala is a holy land where this is unacceptable. Here only the nationalist ideology should be promoted,” he told a public meeting, raising the Hindutva pitch while seeking to highlight the killing of BJP-RSS workers.

Adityanath claimed that the God’s own country, as Kerala is often called, has been witnessing political violence sponsored by the ruling party.

“It is in the nature of the Left party to grab power at gunpoint,” he told a news agency.

“There is no scope for violence in democracy, but, unfortunately, Kerala has been witnessing politically-sponsored violence. With this ‘yatra’, we will make people aware of the CPI-M’s misrule,” he said.

The Uttar Pradesh chief minister said if the CPI-M believes in democracy, it will have to answer questions about the political killings taking place in Kerala.

Reacting to the CPM troll inviting him to visit the hospitals in Kerala to gauge the good health care facilities, Yogi retorted that Kerala should take a cue from UP in health care. “As many as 300 deaths due to dengue were reported here last year. Chikungunya also killed many people. There were no such cases in my state though it is much bigger than Kerala,” he said.

“The yatra is to ensure security to the common man. The people should condemn the political killings  in the state. Dalits and poor people constitute the majority who were killed under the CPM rule. The CPM government has failed in protecting the life and properties of the common man,” he alleged.

He claimed that there were no political clashes in the 13 states ruled by the BJP and in the other states where the party is part of the government. Yogi took part in the yatra for a few km from Keecheri and addressed a public meeting in Kannur in the evening.