Yechury said that the BJP was using the cycle of violence to divert people’s attention from real issues. 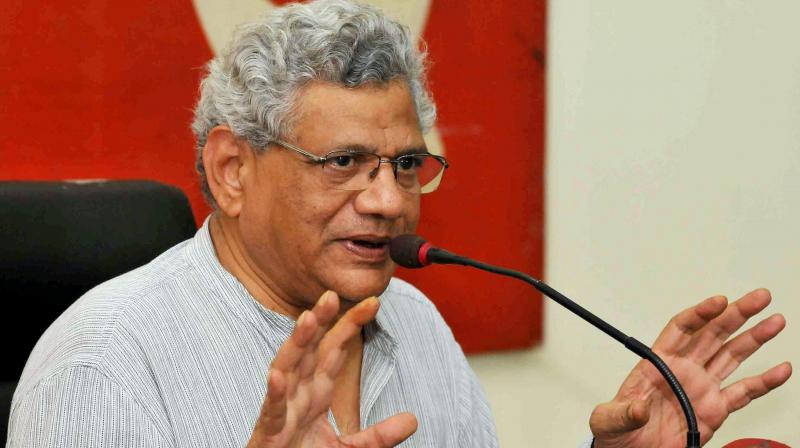 New Delhi: As the BJP fielded its Hindutva icon and Uttar Pradesh chief minister Yogi Adityanath to take on the Left front in Kerala, the CPI(M) on Wednesday announced a countrywide agitation from October 9, claiming that the cycle of political violence in the state was begun by the RSS when the Left Democratic Front came to power in the state in May last year. The CPI(M) also released a fact-sheet on RSS-BJP violence in Kerala.

“The pot is calling the kettle back,” CPI(M) General Secretary Sitaram Yechury told the media here.

“The onus is on the other foot. The entire cycle of violence has been started by the RSS. That violence has started since the LDF came to power in May,” he said.

Mr Yechury said that the BJP was using the cycle of violence to divert people’s attention from real issues.

“Countdown has started for (Prime Minister Narendra) Modi. That is why they are using violence and communal hatred as tools to divide people. This had been their methodology for long,” he added.

“People are discontent. Modi government has failed at the national level. People of Kerala and Bengal have rejected them,” the senior party leader said.

Mr Yechury announced that the CPI(M) will organise a nation-wide protest on October 9. The agitation would counter the 15-day march launched by BJP President Amit Shah on Tuesday to highlight CPI(M)’s alleged violence against BJP-RSS workers in Kerala.

“The rejection of their politics would be done democratically by the people of Kerala and West Bengal and party workers,” the CPI(M) leader added.

On Tuesday BJP chief Amit Shah launched his party’s “Jan Raksha Yatra” in the state and the first to take forward the baton was Yogi Adityanath who held a march in the state on Wednesday.

In Marxist Kerala, the BJP intends to rely on religion to counter the reds. Before launching his yatra, Mr Shah played the Hindutva card by offering prayers at the Rajarajeshwara temple in the northern district of Kannur in the state. Yogi Adityanath one of the Hindutva hawks would take forward the fight against the so called  “Jihadi red terror.”

In a scathing attack, the BJP chief while launching his yatra  accused Marxist chief minister, Pinarayi Vijayan of being “directly responsible for all political murders in Kerala”.

The BJP’s “Jana Raksha Yatra” is expected to travel through Kerala before culminating in Thiruvananthapuram on October 17.

As part of the ‘padayatra’, Mr Shah will on October 05 walk past the home of Chief Minister Vijayan in Kannur, as a mark of protest against the ruling CPI-M’s “political violence”.

The BJP is organising the padyatras in all states over the next two weeks, including a march to the CPI(M) headquarters in the national capital.