India   Politics  05 Oct 2017  Akhilesh Yadav to take charge of SP, with or without father
India, Politics

Akhilesh Yadav to take charge of SP, with or without father

If Mulayam Singh Yadav does not attend the convention, this will be the first major party event without the presence of its founder. 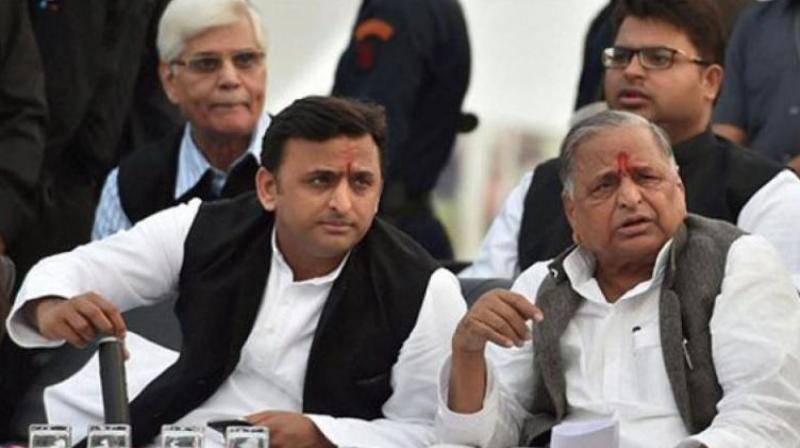 Lucknow/Agra: Samajwadi Party president Akhilesh Yadav is all set to be re-elected as the party’s national president at the two-day national convention which begins in Agra on Thursday. A resolution will also be passed at the convention to make changes in the party constitution to extend the president’s tenure from three to five years.

The national convention — the highest decision-making body of the party — is also significant as all eyes are on SP patriarch Mulayam Singh Yadav.

Last week, Akhilesh Yadav had met his father after a gap of three months to invite him to the event, but sources close to Mulayam Singh Yadav say that the senior leader has not yet given any indication of going to Agra.

If Mulayam Singh Yadav does not attend the convention, this will be the first major party event without the presence of its founder.

Addressing a press conference in Agra a day ahead of the convention, the former UP chief minister said that his uncle Shivpal Yadav had telephoned to bless and congratulate him on Wednesday.

“I got the benefit of my age and our relation. He gave me blessings and congratulated me also,” Akhilesh Yadav said.

Mulayam Singh Yadav and Shivpal were not in Agra before the key party meet, expected to be attended by over 15,000 workers. Shivpal Yadav, in fact, had made it clear earlier that he has not been invited to the convention and will not be attending it. Mulayam Singh and Shivpal had also skipped the party’s state meet in Lucknow last month.

The amendment extending the party president’s tenure, once passed, will ensure that all elections for the next five years — UP’s local body polls, the next round of Lok Sabha and Assembly polls — are held under Akhilesh’s leadership.

As president, he will be the final signing authority in ticket distribution — a clear message to the rebel faction led by Akhilesh’s uncle and Mulayam Singh Yadav’s younger brother Shivpal Yadav about who is in charge.

On January 1 this year, Mulayam Singh Yadav was replaced as party president by Akhilesh Yadav at a delegates’ conference in Lucknow. Both Mulayam and Shivpal have since been systematically sidelined by Akhilesh, though the son has maintained all along that he has his father’s blessings.

Mulayam Singh Yadav recently said that though his blessings are with Akhilesh, he does not agree with the decisions taken by his son.