After meeting the victim's family, the former Congress chief said the family is demanding nothing but justice 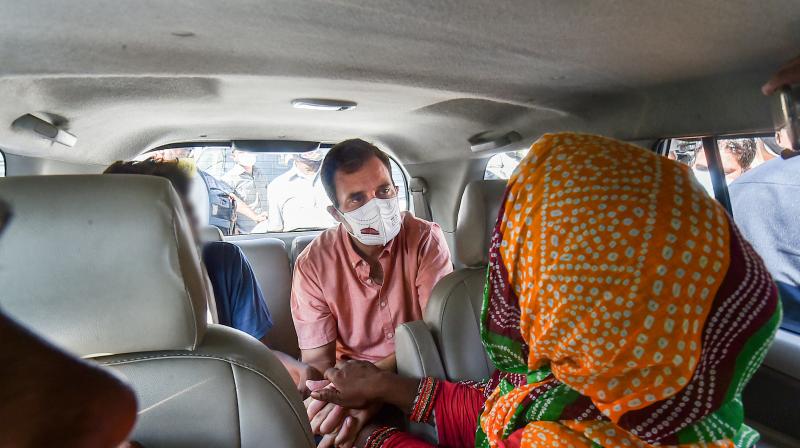 New Delhi:  Congress leader Rahul Gandhi on Wednesday met the family of the nine-year-old Dalit girl who died following an alleged sexual assault and asserted that he was with them on the path to justice.

Meanwhile, Delhi chief minister Arvind Kejriwal also met the family and announced Rs 10 lakh compensation for the victim’s family and assured them of justice. He also ordered a magisterial probe into the incident.

Later on Wednesday the Army establishment at Delhi Cantt served a notice to protesters at Old Nangal village to vacate the area in view of the security concern. Police had also transferred the case to Crime Branch for speedy investigation.

After meeting the victim's family, the former Congress chief said the family is demanding nothing but justice and is saying that they are not getting it and need all the assistance in this.

“I told them that Rahul Gandhi is standing with them till they get justice and will not back down even an inch,” he told reporters after meeting the parents of the victim.

Asked with whom does the responsibility lie in the case, Gandhi said, “I only know that it is my job to help them.”

Mr Kejriwal said, “Our girl cannot come back. The injustice done to the family is unfortunate and cannot be compensated, but the government will give `10 lakh to them and order a magisterial inquiry into the matter. The parents of the girl accompanied by hundreds of locals have been staging a protest near the site of the incident in Old Nangal area in southwest Delhi, demanding capital punishment for the accused.

When Kejriwal reached the area to meet the parents, the protesters mobbed the chief minister and started raising slogans against him.

The chief minister said that the government will appoint top lawyers to ensure the guilty get the harshest punishment.

“There is a need to strengthen law and order in Delhi. I appeal to the central government to take firm steps in this direction, he said.