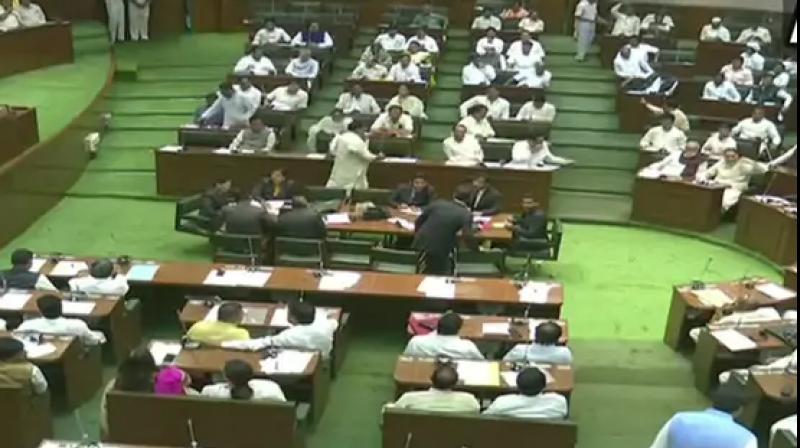 Mumbai: Twelve BJP MLAs were suspended from the Maharashtra Legislative Assembly for one year after the state government accused them of "misbehaving" with presiding officer Bhaskar Jadhav in the Speaker's chamber on Monday.

Leader of Opposition Devendra Fadnavis termed the allegation as false and said Jadhav's account of the incident was "one-sided".

However, Jadhav sought a probe into the allegation that some Shiv Sena members and he himself made uncharitable remarks, and said he was ready to face any punishment if it was proven true.

The motion to suspend the MLAs was moved by state Parliamentary Affairs Minister Anil Parab and passed by a voice vote.

Parab said during the period of suspension, the 12 legislators will not be allowed to enter the Legislature premises in Mumbai and Nagpur.

Objecting to the decision, BJP members, led by Fadnavis, said the opposition would boycott the House proceedings.

"This is a false allegation and an attempt to reduce the numbers of opposition benches, because we exposed the government's falsehood on the OBC quota in local bodies," Fadnavis said.

He said the BJP members had not abused the presiding officer. "It was Shiv Sena MLAs who used abusive words. I brought our MLAs out of the Speaker's chamber," Fadnavis said.

Ashish Shelar apologised and the matter ended, the former CM said, claiming that what Jadhav said was a "one-sided" account.

Earlier, NCP leader and minister Nawab Malik accused the BJP members of misbehaving with Bhaskar Jadhav and the state Assembly was adjourned four times over the issue.

The House was initially adjourned for 10 minutes after Jadhav put to vote the resolution urging the Centre to provide 2011 census data to enable the State Backward Class Commission to prepare an empirical data of the OBC population, in a bid to restore political reservations for its members in local bodies.

Some BJP members, including Girish Mahajan and Sanjay Kute, climbed the Speaker's podium and argued with the Chair.

Later, after the House reassembled, minister Nawab Malik and Shiv Sena member Sunil Prabhu demanded that action be taken against the opposition members for their behaviour with Jadhav.

"What happened in your chamber is not right," Malik said addressing Deputy Speaker Narhari Zirwal.

The Deputy Speaker then adjourned the House for 15 minutes.

Later, presiding officer Dilip Bankar adjourned the House for another 15 minutes and again for 30 minutes.

Talking to reporters outside the House, Malik alleged that the BJP members had "gheraoed" Jadhav in the Speaker's chamber and used abusive words.

He claimed that Fadnavis also broke his own mike.

Chief Minister Uddhav Thackeray then called Jadhav in his chamber to seek information on what had happened.

When the House reassembled after the fourth adjournment, Jadhav was in the Speaker's Chair and gave a detailed account of what had happened.

He said Maharashtra's tradition was never to take outside the differences expressed on the floor of the House.

"Today is a black day for me. Abusive words were directed at me. Some people are saying I made uncharitable remarks. Let there be a probe into it after checking the CCTV footage. If I have used any inappropriate language, I am ready to face any punishment," Jadhav said.