GST row: I can lynch you here, says J&K minister to lawmaker in Assembly

Jammu and Kashmir is the only state which is yet to implement the GST, which came into force in rest of the country on July 1. 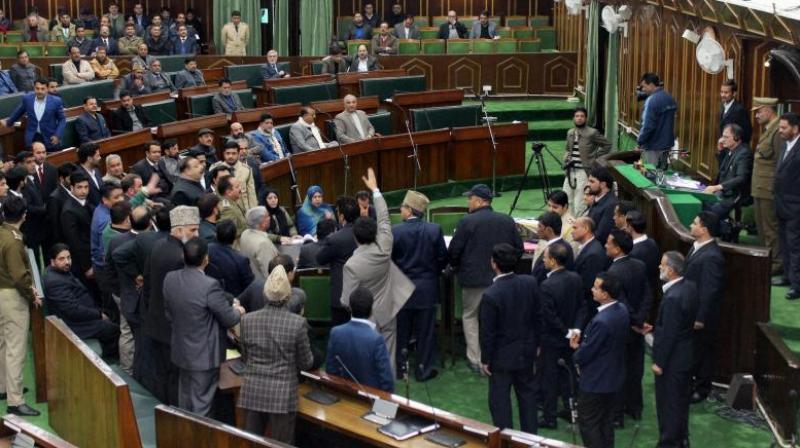 Deputy Speaker Nazir Ahmad Gurezi hit out at both the opposition and the treasury members for 'wasting the public money'. (Photo: File/PTI)

Srinagar: "I can lynch you here," Jammu and Kashmir minister Imran Ansari told National Conference leader Devender Rana in the Legislative Assembly during a discussion on implementation of the Goods and Services Tax (GST).

The remark came during a heated argument between the minister and the opposition MLA.

Jammu and Kashmir is the only state which is yet to implement the GST, which came into force in rest of the country on July 1. Mr Rana, while taking part in the discussion on the GST regime, said members of House should rise above "political considerations" and agree upon what is good for the state and its people.

He opposed the GST in its current form, saying it would render the special status of the state as a "hollow husk".

The minister for information technology, technical education and youth services and sports, interrupted and accused Rana of "double standards".

He claimed that while Rana was opposing the GST in the Assembly, while he has already migrated his businesses to the new taxation regime.

He also read out the provisional GST registration numbers of various businesses owned by Rana and his family.

Responding to the accusation, the NC lawmaker said he had done nothing wrong as obtaining GST registrations had no legal validity in view of non-implementation of the new tax system in the state.

To this, an infuriated Ansari said: "I can lynch you here. I know all your shady businesses. There is no bigger thief than you. You started from selling mobil oil. Where did you get all this wealth from?"

Rana, who kept his cool, responded: "Many like me can be sacrificed at the altar of safeguarding the interests of Jammu and Kashmir."

Several senior NC MLAs joined the issue. Ali Mohammad Sagar, the senior-most member of the House, told the minister, "If you have planned to silence him (Rana), you are mistaken. Everyone has a right to express his opinion."

Deputy Speaker Nazir Ahmad Gurezi hit out at both the opposition and the treasury members for "wasting the public money".

"Stop attacking each other. People might strip you when you go out. This is nonsense. Stop it!" he said.