Kejriwal was slapped allegedly by a disgruntled AAP supporter during a roadshow on Saturday. 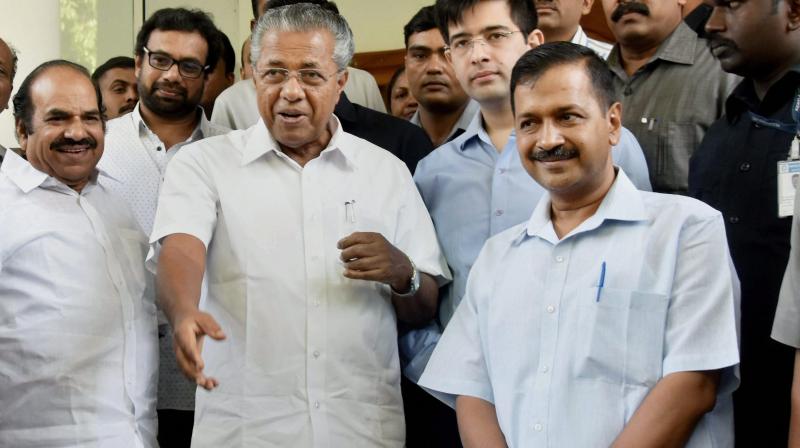 "We are outraged and horrified by this act of aggression against the Chief Minister of a state," Vijayan said. (Photo: File)

Kejriwal was slapped allegedly by a disgruntled AAP supporter during a roadshow on Saturday.

"We are outraged and horrified by this act of aggression against the Chief Minister of a state," Vijayan said in a Facebook post.

He said the attack on Kejriwal was an attempt to muzzle the voices against the Sangh Parivar. Vijayan said he had spoken to Kejriwal over the phone and that this was not the first time he has been attacked.

The inaction of the Delhi police, which is controlled by the Central government, has served as an encouragement for the attackers, Vijayan said.

On Sunday, Kejriwal alleged that the BJP was responsible for the attack and claimed he was targeted because he had been lately questioning Prime Minister Narendra Modi's 'relationship' with Pakistan.

The AAP supremo, at a press conference held at the party headquarters, said this was not just an attack on him but an assault on the people of Delhi and the mandate they had given.

The BJP, however, rubbished the claim as Kejriwal's 'propaganda.'

"This is the ninth attack on me and fifth one since I took charge as the chief minister of Delhi. And, for any attack on me in future, BJP will be responsible," Kejriwal said.

"They (BJP) do not want the common man to enter politics, so we are being targeted. Our only fault is we have tried to bring development in Delhi, in education, health and other sectors. They are feeling insecure...," he said.