Be it BJD, Cong or BJP, Odisha is witnessing a lot of candidates, who are in the fray with family members representing the same party. 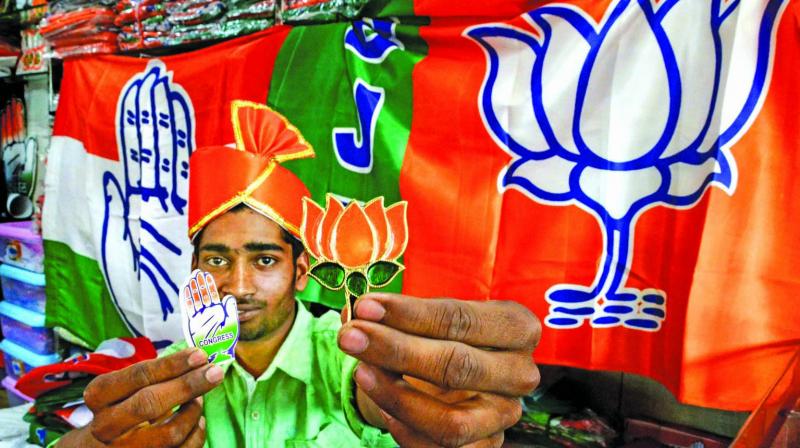 Not just BJD and Congress, the Bharatiya Janata Party (BJP) also has few examples of party leaders who are contesting along with members of their respective families. (Photo: File/ Representational Image)

Bhubaneswar: Be it the BJD, Congress or BJP, politics in Odisha is witnessing a lot of candidates, who are in the fray for the state Assembly and Lok Sabha polls along with family members representing the same party.

While Kalikesh is the sitting MP from Bolangir, his younger brother Arkesh Is debuting in politics. Their father, Ananga Udaya Singh Deo was the Rajya Sabha MP from April 3, 2014, to April 3, 2018, from BJD.

Something similar can be seen in Congress too.

President of Odisha Congress, Niranjan Patnaik is contesting Assembly election from Ghasipura, while his son Navajyoti Patnaik has been nominated by the party to contest on Balasore Lok Sabha seat.

Tribal leader George Tirkey, who recently joined Congress, has been asked to contest from Sundergarh Lok Sabha constituency against Union Minister Jual Oram. His son Rohit Joseph is the Congress candidate from Birmitrapur Assembly seat, currently held by his father.

Not just BJD and Congress, the Bharatiya Janata Party (BJP) also has few examples of party leaders who are contesting along with members of their respective families.

KV Singh Deo and his wife, Sangeeta Kumari Singh Deo are one such example in BJP.

KV Singh Deo is contesting from Patnagarh from where he is the member of the Legislative Assembly since 1990, while his wife Sangeeta Kumari Singh Deo, who is three-time MP from Bolangir, will represent the party from the same seat.

Odisha will vote in four phases on April 11, 18, 23 and 29. The state will be voting simultaneously for 21 Lok Sabha and 147 Assembly seats. The counting of votes will take place on May 23.